Show Me Your Lightning Bolt!

Share All sharing options for: Show Me Your Lightning Bolt! 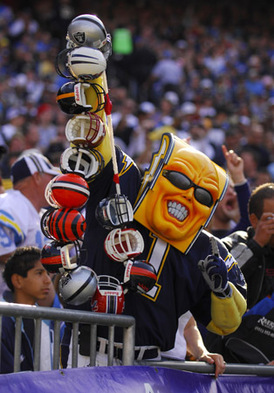 Being a Chargers fan outside of San Diego can be an odd experience.  Most of the people you can discuss football with know very little about the team beyond "LT is unbelievable", "Merriman is on roids!" and "Rivers is a whiny little girl" (becoming less frequent after he calmed down in 2008).  The Chargers also don't get a lot of play in the national media beyond that either.

I have spent the last two and a half years living in Philadelphia and trying to find ways to stay in touch with team news and other fans.  I touched on this in my last post, talking about how when I first moved here I found Gaslamp Ball as a way to stay in the loop with what was happening with the Padres.  Bolts From The Blue, still growing, is doing a great job of providing a home base on the internet for subplanted Chargers fans who want to discuss and dissect the team.  But we can do more.

I own an iPhone.  I'm kindof a nerd actually, so the mini-computer in my pocket is fitting.  But since I have priorities in order, I have utilized my iPhone in several different ways to stay as connected to the Chargers as possible.  I use the WunderRadio application to listen to XX 1090 during the week when I'm driving in my car (I can't stand listening to Philly sports radio) and I listen to Rock 105.3 if for some reason I'm not home in time for the beginning of the game.  I use the Sportacular application to check scores and stats both during and after games.  And I use Twitterific to see what other users are tweeting about the Chargers, whether it be news or opinions.

Last week I ran into a bit of a problem.  I downloaded an application called FanFinder, and I got a little too excited.  This application's functionality is to connect you with other fans of the same teams.  How?  By finding you sports bars that target the fans of your favorite team.  It seems silly to think about it now, but I knew if I had any chance of finding a Chargers bar in Philly or New Jersey or Delaware or even Maryland that this app would be my way to do it.  And not every week, but maybe once or twice a year I'd go watch a game there and remember what it's like to be completely surrounded by Chargers fans during a game.  Call me a dreamer.

As you can imagine, this area I live in is fairly territorial about their football teams.  Eastern Pennsylvania doesn't do anything but Eagles.  New Jersey roots for the Eagles, Giants and Jets (but they'll only choose one and hate the other two with a fiery passion).  Maryland is split evenly between Ravers and Redskins fans and Delaware is pretty mixed up between all of those teams.  When I searched on the app I got exactly what I expected.  The nearest Chargers bar to my location is the place where there's a bar for every team in the world.  New York City.  Now, I go to NYC from time to time and the next time I plan on looking for said Chargers bar, but it's still roughly three hours away and therefore not the most ideal place to go spend an afternoon watching the Chargers and getting blitzed.

Now this all brought me back to one comment in response to the Voice of the Chargers Fan post from last week that had stood out to me:

Some of the other blogs do a "Fan viewing party" sort of thing during the season, and I think that would be a great idea for this blog as well. Maybe have one in SD one weekend, and then have one up in the OC/LA area another weekend (for all of us transplanted fans up here). The larger this community gets, the more fans we can bring together.

That was courtesy of Clip Show, who is quietly becoming one of our best commentors.  Not only do I think that's a great idea, I think we have a great opportunity here.  The Chargers are a sexier team than they're given credit for.  Our running back, although old, is maybe one of the five or six best running backs of the last 40 years.  Our quarterback, who is young, plays with a chip on his shoulder and has unlimited potential.  He also put up Pro Bowl numbers the year after tearing his ACL (and still playing a playoff game on one leg without embarrassing himself) and it was hardly ever mentioned by anyone but Chargers fans.  Wait until next season when people are saying how "unbelievable" it is that Tom Brady can take an entire season, plus the offseason, to recover and then play great again.  It'll happen.  And it'll put our position in the world of sports media into perspective.

It's time we band together.  In Philadelphia I occasionally see people walking around in Tomlinson jerseys.  I don't know if they're fans of the player or the team, but it doesn't really matter.  Instead of just saying "Nice jersey", as I've been doing, I'm going to converse with that person.  Ask them how much they know about the team.  Who knows, maybe I'll find a few people that are in the position I was in of not having a decent place to talk about the team amongst other fans and I'll send them here.  If you're a Chargers fan outside of San Diego, either for vacation or for residence, I suggest you do the same.  Just because the national media doesn't talk about us doesn't mean we can't start the process of growing the fanbase ourselves.  We can become a community that has bars and fans across the country.  If the Raiders can do it, why can't we?

So this is step one.  We build the BFTB community.  We reach out to each other now and we put the wheels in motion for viewing parties, bars, a growing fanbase and die-hard fans that are respected.  So, fellow readers and writers, where are you from?