Right tackle was clearly an issue for the Chargers last year. While it was the defense that most needed shoring up; it would be hard to pass on a franchise type tackle if one fell to the sixteenth pick. At the combine both Jason Smith and Eugene Monroe did well enough that there is virtually no chance they will be available. 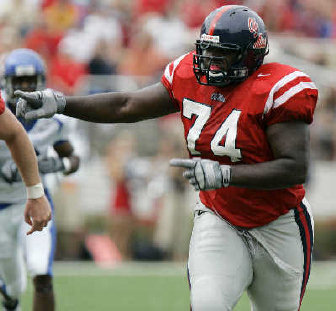 The first outside possibility at tackle would be Michael Oher from Ole Miss. With a height of 6'5" he comes in at 309 pounds. He ran a 5.32 at the combine, which is a bit on the slow side. He benched 225 pounds 21 times, which is generally just over what you would expect. The top mark was around forty. Oher comes with an interesting back story of breaking through poverty, homelessness and being mislabeled with an 80 IQ as a child to his current position of signing a contract that will make him extraordinarily wealthy. I find I have to root for a guy like this and would love to see the Chargers pick him up if available. He has a reputation of being better at pass blocking than run blocking.

Andre Smith started this draft as a top ten pick but likely slid considerably with a slipshod effort at the combine. He was unsure if he would work out there; but then didn't bother to tell anyone he decided against it and just left. His interviews were deemed weak; particularly for a guy auditioning for millions of dollars. He was also suspended for a game because he talked to an agent early. Still he did put together great seasons at Alabama, but weighed in heavy at 332 pounds and reportedly looked out of shape at the combine; there are clearly serious questions about his motor. I can see why the Chargers would be tempted to take him if he fell that low; but I hope they won't. There are just too many red flags here for me.

William Beatty out of Connecticut weighed in at 307 pounds and is 6'6". His 40 time was 5.02 and he benched 27 times. Strictly by the numbers this looks to be a solid pick. He has put on 16 pounds since the end of the season and was a key blocker for Donald Brown. Beatty might be a reach at 16, but perhaps a trade down with a team that is looking for one of the QB's if they are still available could get us a tackle and another pick. Beatty had an excellent Senior Bowl and could end up being a steal if he continues to develop.

Eben Britton comes out Arizona at 6'6" and 309 pounds. He ran 5.15 and benched 24 times, but did have relatively short arms. He thrived at Arizona in the left tackle slot and is coming out early. This too looks to be a solid pick at tackle, but may be a reach at 16.