Share All sharing options for: Kevin Burnett - The Chargers New Starting Inside Linebacker?

I asked my friend Dave Halprin over at the Blogging The Boys website for the lowdown on Kevin Burnett.  Here was his overview:

Kevin Burnett's career might have turned out differently in Dallas if he could have stayed healthy in his first years on the team. I've always thought he was a talented player and he would sometimes flash that on the field, but once he fell behind in his rookie year because of injury, he got stuck in the position of backup. He ended up playing behind guys like Akin Ayodele, Zach Thomas and now it was going to be Keith Brooking. The Cowboys didn't see him as starter material but I'm not so sure. If given the opportunity, there's a chance he could succeed.

He's not the biggest guy though, his frame isn't as thick as you would like for the position so manning an every-down ILB role in a 3-4 won't be easy. If he doesn't start, he'll be a valuable backup and a good special teams player. He ended up as our WILB on the nickel/dime sets and was used to drop into coverage a lot. He has some skill in that area and I think we'll miss him in that role. I would have liked for him to return to the Cowboys but it was obvious he wanted a chance to compete for a starter's role and be closer to home, things that weren't going to happen in Dallas. He's a good reserve and special teams player, so at minimum you got that.

He sounds to be just a bit of a mixed bag.  Burnett has had injury problems; and being a bit on the small side could lead to more, at 6'3" he weighs in at just 227 pounds.  The key to this pick up is his ability to cover; if he can do a good job dropping into coverage that will be huge for the Chargers who got eaten alive by Tight Ends last season.  The Chargers have some linebackers who are good against the run; so I almost wonder if they might think about sharing the position between Dobbins and Burnett depending on the situation. 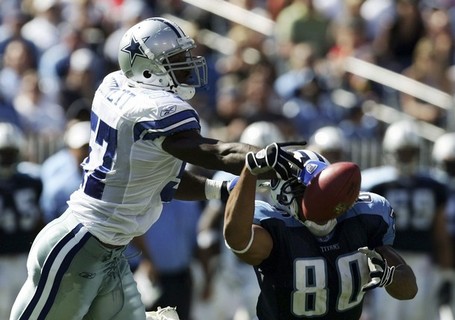 As a backup last season Burnett made 38 tackles, two sacks, three passes defensed and one forced fumble.  The three PDs compare very well with out current full time linebackers apart from Stephen Cooper.  Another aspect that looks good to me is the number of sacks he has in relatively limited playing time.  Partly that could be playing on the same team as DeMarcus Ware, but with two sacks he put up more than any of our current ILB's did.  Overall this looks to be a shrewd pick up for the Chargers as long as he stays healthy.  While I can see him competing for the ILB spot; I'm not sure that this precludes the Chargers going after a linebacker with the first round choice.  Burnett could simply be viewed as Waters replacement.  One reason I think so is the contract; it is for a pretty reasonable 5.5 million over two years.  If Burnett breaks out the Chargers would have to let him go or pick up another big contract; if they were sure he was the starter they would have locked him down for more years in my opinion.