After what felt like a week of water torture; all is right with the world.  The Chargers retained future Hall of Fame runningback LaDainian Tomlinson according to espn.  [Huge HT to sdsuaztec4]  While the Chargers felt they had to renegotiate the contract to stay competitive; this had to be hard for LT to agree to, particularly in light of Sproles $6 million franchise deal.  Tomlinson came to the Chargers when they were in their nadir and has played brilliantly throughout his eight year career.  While closing on 12,000 yards rushing he bulled his way to 126 rushing touchdowns; he was the soul of the franchise.  With his distinctive jump cut and unworldly balance he straight armed his way to virtually every Charger rushing record as well as the single season NFL TD rushing record. 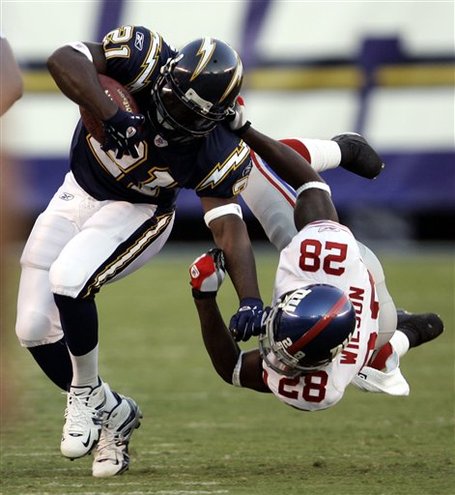 With all that he as accomplished the last few years haven't been easy.  After the Chargers went 14-2 in 2006 they were shocked by the Patriots in the first round of the playoffs.  LT took particular exception to the Patriots celebrations which he felt were unprofessional.  The next year saw his carries decline somewhat and he was injured enough to send him off the field against the Colts in the playoffs.  Watching the Chargers beat the Colts and ultimately lose to the Patriots again was bad enough; but the media also questioned his toughness in staying out.  This season the Chargers again struggled early and LT suffered from a toe injury in the first game against the Panthers.  That injury would continue to nag him throughout the season as his average yards per carry dipped to a surprisingly human 3.8 yards per carry.  He seemed on the verge of a breakout in the Chargers final game against the Broncos; but suffered a groin injury in the process.  He was again on the sidelines for most of the playoffs and the statistics for 30 year old running backs are not happy ones.

This was the context in which negotiations began with many speculating that the Chargers might do the unthinkable due to the size of LTs contract.  To further complicate things AJ Smith made comments that many thought mocked LT; for which he quickly appologized.  On the other side the Chargers were unhappy that the extent of LTs groin injury had been leaked in the heat of the playoffs.  The cards seemed stacked against a return by one of the best players ever to blaze across the grid iron.  But don't ever count Tomlinson out; he has come through once again for the Chargers.  There is no doubt he could find more money on another team, but he has remained loyal to the Chargers and his fans.  On the other side we have to give credit to Dean Spanos who clearly worked as a calming influence between AJ and LT, and also will paying LTs still substantial salary.  This is one of the great days in San Diego sports; what a gift it has been to watch LT jump cut his way to the pantheon of NFL greats; we will now watch him finish his career where he belongs; in blue and gold.