The folks over at Next Season Sports asked me to participate in a mock draft.  Many of the prospects we have already discussed were taken including the best of the inside linebackers, but surprisingly one of the top OTs was still available.  I picked him; the Chargers will be pretty fortunate if they can do that in the actual draft.  Take a look and how you might have chosen.  It might take a little bit before the Chargers pick is posted.  Here is the text that will go up:

With the sixteenth pick the Chargers take tackle Jason Smith out of Baylor.  The Chargers have a number of needs this season including Offensive Tackle or Guard, Safety, Inside Linebacker, Defensive End, Nose Tackle and perhaps running back.  Of those needs Tackle can be a tough skill position to fill and Smith seems like a total value at number sixteen.  The Chargers current guard, Mike Goff is leaving as a free agent.  He was less productive and the right side of the line struggled all year.  The current thinking is that the Chargers can bring in a new tackle and shift current Right Tackle Jeromy Clary to the guard position. 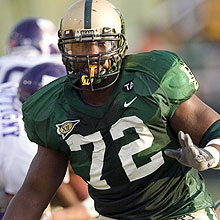 Jason Smith has been especially good in pass blocking and Norv Turner has the Chargers changing to be more of a pass oriented team.  This pick could solidify the line for the foreseeable future.  There are still big needs on the defensive side of the ball; but Jason Smith is just too tempting here.