Quentin Jammer has quietly developed himself into a great cornerback. He is consistently a league leader in 'Yards per Attempt'; this year he came in under six and close to a forty percent forced incompletion rate. He did have four TDs thrown against him and had some off games. The other thing not registered in his run support defense. He really brings big hits and comes up fast on running plays. Against Tampa Bay he just demolished Jeff Garcia on his bootleg late in the game. He does not have the best hands, but did come up with two interceptions this year including one great catch against Peyton Manning. When Jammer broke into the league corners could be much more aggressive which was just his style. He struggled considerably when the NFL clamped down the rules and was usually among the league leaders in pass interference calls. Now he is still among the most physical corners, yet still isn't called for many PI violations. One blip on the horizon, Jammer often went out late in games with hamstring or cramp issues. He does have a number of years in the league now and he may be on the down side of his career where he begins to lose a step and have more injuries. 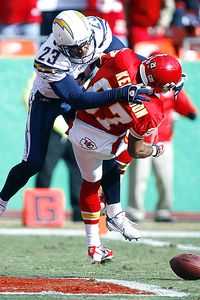 It was clear that Cromartie had a down year; but just how awful you don't realize until you see some of the more detailed statistics. He allowed just over 11 yards per attempt, virtually double Jammers figure and had a forced incompletion rate of just 13%; roughly one third Jammers rate. He had the hip injury early and that clearly hampered him; and some of his numbers were the result of safety play, but Jammer played with the same safeties. Even last year his yards per attempt were high, but then he had the interceptions which more than made up for it. Quarterbacks also had an awful lot of time to throw the ball in Merriman's absence, the lack of a pass rush certainly contributed too. Still at some point you have to say that Jammer played under the same conditions and played remarkably better; next season should be make or break for Cromartie. Cromartie was also a pretty tepid tackler, partly that may be the result of his hip injury, but he often just looked awful when confronted with larger ball carriers. Last season I was thinking they should have been trying to sign him to a long term contract; it looks like waiting was pretty shrewd.

The Chargers nickel corner saw a lot of action this year. Antoine Cason had a good year. His yards per attempt were under six like Jammer; but his forced incompletion rate was only %20. He was one of the best and surest tacklers on the team; he needs to work some on keeping the receiver from catching the ball. He made two interceptions but had 3 TDs thrown against him. Considering this was his rookie season; I have to like what he has shown so far. If Cromartie comes back healthy but doesn't return to form, I can easily see Cason competing for that starting position.

Cletis 'Flash' Gordon is the backup corner. He is extremely fast and did some good work filling in for Jammer early in the season. Against the physical Steelers he was exposed as not being quite there yet. With Cason, Cromartie and Jammer all being first round choices it is hard to picture AJ investing more in this secondary. A talented second tier free agent or undrafted free agent that shows promise might be looked at for next season. (HT to Tony Pisano for his article on the top 50 corners)