Share All sharing options for: Should the San Diego Chargers Re-sign Drayton Florence

With the typical Chargers low drama free agency period, the one story on the horizon is Drayton Florence's wish to come back to San Diego. Apparently he had worked hard at trying to get an extension here before going off to the big payday with the Jaguars. His time with the Jaguars was not a happy one where he failed to get a starting corner position and became an extremely well payed nickle back. That created some tension within the Jaguar locker room and he was cut loose after the seasons end. 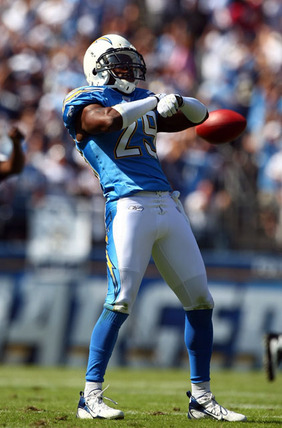 When Drayton Florence left San Diego he also left a mixed legacy. He could make big time hits, but also seemed prone to hot headed mistakes. The most conspicuous was his headbutt that was one small piece in the 2006 playoff loss to the New England Patriots. He also laid a headbutt on Houston Texans quarterback that knocked him out of the game; he was later fined for it. Here was a huge hit against a Lions receiver:

Florence was a capable corner for us and he didn't say a word when he was demoted from corner to nickel. It has to be the hope that Cromartie will return to form; and if he doesn't there is Cason behind them, but Florence would provide an extremely deep secondary. We could also consider using Florence at safety in spots, he certainly can lay a hit on, though he is somewhat light for that role. I wasn't particularly sorry to see him go, but the fact that he worked to stay with the Chargers and wants to come back is a good sign to me. Also he has had is big payday, so the word is that he might be willing to sign a very team-friendly contract.