Darren Sproles had the franchise tag applied to him yesterday. That means at a minimum he will get 6.2 million next year; though the Chargers are looking to lock him down long term. That could mean he will settle for less per year; but undoubtedly more gauranteed. Sproles was certainly a hero in the game against the Colts; but it is easy to forget that he also fumbled at the goal line in that game. Given that the Chargers have taken the plunge; lets take a look at Sproles production last season. 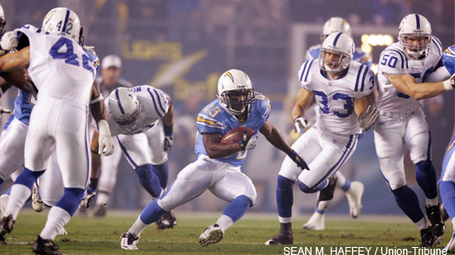 My overall impressions are these; he is much better when the Chargers can get him the ball in space; that's when he is at his most effective. The Colts with their Tampa 2 tend to be easier to run against; and not surprisingly he did extremely well in the playoffs against them. The trouble was that in Pittsburgh against the 3-4 defense he was wholly ineffective; when he runs up the middle he is on the small side to make tough yards. The other thing he brings to the table is the return game; and it is easy to overlook its importance to the Chargers. When trading punts with another team the Chargers tend to pick up yards not only with Mike Scifre's big boot, but also with Sproles excellent punt returns. Sproles ranked eighth in the league for punt return yards at 11.1 and eighth in kick off returns at 26 yards per return. If the defenses force the offenses to punt a few times, the ball tends to creep towards the opponents goal and once Rivers gets a start at midfield he is usually deadly. Lastly is his ability in receiving out of the backfield. He broke any number of screens for serious yards; in fact of his six TDs; five came on pass plays.

Lets take a look at some specific games. He went largely unused in the game against Carolina; but did make a 41 yard kick return. He came back with a vengeance against Denver the next week. Forgotten in the aftermath of referee Ed Hochuli's blown call was a terrific game by the Chargers little big man. He broke off a 103 yard kick return for the TD then followed that up with a 66 yard screen play that also went for the TD and then rushed for 50 more yards for some icing. He had moderate success against the Jets, rushing for nearly 40 yards and catching for about the same. Against the Raiders he didn't do much from scrimmage but busted off a 67 yard return that led to a go ahead field goal. He was largely held in check by Miami with the exception of a 25 yard pass. He had a nice 25 yard punt return against New England; but also sprained his ankle which would limit him over the next few games.

It wasn't until the December 4th game against the Raiders that he would break out again with two TDs through the air. He also had a 67 yard punt return called back for holding. He was not used much against KC; but he was integral to the Tampa win. He turned a screen into a 32 yard Touchdown, made a 44 yard kick return and a 43 yard punt return. Then against Denver he ended up with 115 yards and a TD on the ground and then another TD through the air. Finally he had the fantastic game against the Colts in the playoffs with 300+ all purpose yards and the back breaking final TD. One of the off feild aspects that speaks well for him; Sproles is known for his stutter which he has worked hard on losing; I have a real admiration for how he has fought to overcome that.

There are a couple of down sides in his record though. One is that apart from the Jets; he really only came up big against teams with defenses that were somewhat easier to run on. The other is a propensity to fumble; he had three on the season on one in the post season. Considering how often he touches the ball, that is just too many and needs to stop. He had that reputation early but worked hard and seemed to overcome it last year; it was back last season however.

Lastly you have to wonder about LT and how this fits in with his contract. If Sproles with 300 yards on the ground is worth 6.2 million for the season, how much can of a pay cut can you really ask LT to take at 8.5 million in cap; it's got to have some pride factor. Here is what AJ Smith had to say about LT given the franchise was applied to Sproles. “This has nothing to do with L.T.,” Smith said. “Our intention is to pursue L.T. We assume that at the combine it will pick up speed and there will be some substance to it when we return.” At the end of the day, despite how much the contract costs and questions about how effective he is against tough defenses I have to say it was going to kill me to see Sproles playing for another team; I love that he is still a Charger next season.