Hey fellas.  Sorry about the lack of posts from me this week.  It's been one of those weeks, probably because of the Thanksgiving holiday last week, where no matter how much work I did one day I never seemed to get caught up for the following day.  Luckily, I finally feel caught up and things should be smooth from here one out.

As I mentioned a few days ago, this article at Dawgs By Nature does a good job of matching the teams up statistically.  For me to do my usual game preview would mean just repeating a lot of what Ryan Kelsey wrote.  Also, it's not as if somebody is going to be surprised at the Chargers being ranked better than the Browns in offense and defense.

So this week I thought we'd try something new. 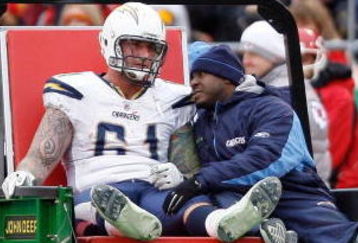 A trap game mixed with injuries.  The closest thing I've found to a trap game during Norv Turner's tenure as Chargers head coach is the game in Buffalo last year.  You know, the one where the power kept going out and so nobody really has any idea how the Chargers lost by 9. It's not something the Chargers are known for.  They're known for being undefeated in December and hopefully that streak continues, but that doesn't mean they can't lose.

The Raiders game in week 1 is an example of how a loss could come.  One or two big injuries along the offensive line and now Philip Rivers can't even get the ball out of his hand.  An injury to one of the few healthy pass-rushers and suddenly Brady Quinn has 5 minutes to make every throw.  Staying healthy is key today, not just for the future but for the victory.

I like the stories I read this week about Norv playing crowd noise at practice, changing practice times and generally shaking the players up to keep them focused.  It sounded a lot like good coaching to me.  Which brings me to....

How to avoid it: This is a young Browns team.  Any time you're facing a team, late in the season, that's been this bad and is this young you have to close the door on them early.  If it's 10-10 at the half, the Browns' belief in themselves will be through the roof and it could be a game lost.

The key to avoiding the trap is to not mess around in the first quarter.  Throw deep.  Throw to Antonio Gates on third down even though everybody knows it's coming.  Don't force the run if it's not there.  Treat the first half like it's the second half, and build a lead big enough that you can take most of your starters off of the field in the second half.

Does anybody else remember this game?  It was the last game of the 2004 season, and it meant nothing to the Chargers (who had already clinched the division).  Marty Schottenheimer treated it like a preseason game, keeping his starters in (minus Brees) just long enough to knock off any rust and get a lead.  Then the kids/projects came in.

That game changed a lot about the team.  Floyd and Turner were finally taken seriously.  Rivers showed that he was every bit as good as they thought he was.  A game like this today would make me monumentally excited.  By the end of the game, players like C.J. Spillman and Michael Bennett should be getting plenty of playing time.  The stars of the team should feel as though they played a game in their backyard, and hopefully won't even be sore tomorrow morning.

So that's your best-case scenario.  Big win, no injuries, and promise shown from some of the kids (Larry English and Vaughn Martin, we're watching you).