Share All sharing options for: Week 16: DVOA Rankings and other Advanced Stats

With only one week left of the regular season, we're starting to get a clear picture of the relative positions of the teams moving forward. I'm not going to discuss particular playoff match-ups this week, but rather save that until after the season ends, and the post-season begins. I'll also avoid the NFC a lot, and focus on the AFC, because right now that's what impacts the Chargers the most.

First of all, the Chargers' DVOA is starting to come into line with their actual play. It's important to keep in mind that the first five games of the season are still weighing down San Diego's overall rating, and also still have some effect on the weighted rankings, although less so. Overall, the Chargers have finally jumped into the top ten, at #8. But that's not really too important. More important is to look at the weighted rankings, which give us a better picture of how teams are playing right now.

In the NFL as a whole in the weighted rankings, there are six teams clustered at the top, all within 5% of each other. Those teams are Green Bay, New England, Philadelphia, Dallas, Baltimore, and San Diego. The Colts come in at #7 and are 6% behind San Diego. For reasons that Schatz points out in his analysis, despite having a high DVOA, Baltimore has real problems and probably aren't as good as the other top three AFC teams.

So if we go just by weighted DVOA, the AFC has three real contenders: New England, San Diego, and Indianapolis. As luck would have it, it seems like the Chargers and Patriots are again on a collision course in the Divisional Round. More on that next week.

So now, more on the Chargers. New week, more of the same. The Chargers' offense continues to improve, both in the overall rankings (presently #3, up from #5 last week) and in the weighted rankings (remains #1). The passing offense is just out of this world good. At 68.5%, it's not historically good, but it's close--the 2007 Patriots' pass offense came in at 75.4%. The rush offense remains really bad--29th in the league. The defense has remained about the same--lower half of the league.

Individually, our favorite players continue to lead their positions. Rivers is #1 in DVOA and #3 in DYAR. Jackson and Gates each come in at #1 in DYAR and #2 in DVOA. An elite quarterback, paired with an elite wide receiver and tight end makes for an incredibly good passing offense.

That's about all I have to say for now, and next week we'll talk about the specific matchups of Wild Card Weekend, and what they mean for San Diego. 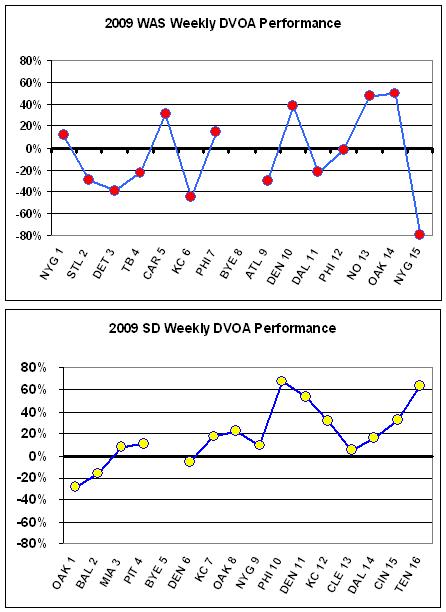