Week 15: DVOA and other Advanced Stats

Share All sharing options for: Week 15: DVOA and other Advanced Stats

Another week, another round up of Football Outsiders, DVOA, and other advanced football stats. This week I'm going to bring in stats from other objective sites such as Advanced NFL Stats, Sagarin, and Beatpaths, for comparison. This article is a little late in coming this week, thanks to Aaron Schatz over at FO being late in updating the DVOA database. After the jump, we'll see some interesting movement on offense, and evidence of the continuing dominance of our big three.

The Week 15 DVOA Rankings saw the San Diego overall efficiency remain about the same, climbing only one spot from #14 to #13. However, the Chargers' weighted ranking, the one that removes the importance of the early season games, moves the team up to 8th overall. The defense has remained about the same--#23 in the normal as well as weighted statistics, and only slightly better in pass defense(21st) than rushing defense(25th).

Now let's take a look at the Chargers' weekly performance, with our DVOA graph. 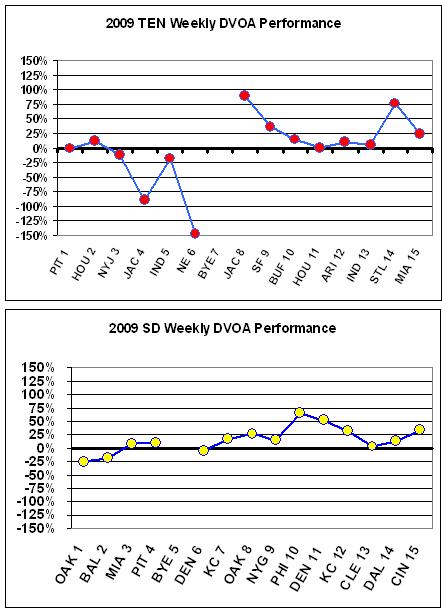 So what does all this mean for the Chargers, now that they're certainly heading to the post-season? The good news is that the Chargers' overall weighted ranking continues to improve. At this point in the season, you aren't going to see much change in the un-weighted rating, because all games have equal weight, and two games aren't going to do much to change what's been established by the previous 14. The weighted stats, however, give us a better idea of how the Chargers are doing NOW, towards the end of the year. Any casual observer can look at the Chargers and say they're a better team than they were earlier in the season, and it's good to see the stats finally starting to bear that out. Are they a top-5 team? No, they aren't. But they are a top-10 team, and that's pretty good. The only thing keeping them out of the top-5 and elite status is the defense. And despite the rhetoric about defense winning championships, the Chargers offense is so good that they can and have used it to take control of games and beat superior opponents. They've done that against two top-5 weighted DVOA teams, Philadelphia and Dallas, once on the road and once at home, both in huge games. That bodes well for the post-season.

There are certainly dangers, though. Because the defense is a weakness, the Chargers are at risk of having another team do the same thing to them--kill the clock at the end of a close ballgame. This has happened a couple times to the Chargers this season--against Pittsburgh and Denver. This is why it's important for the offense to not go silent for entire halves, which was really the cause of the situations in those two games. Had the offense been able to score against the Steelers before a minute left in the 3rd quarter, or been able to score more than 3 points in the second half against Denver, the Chargers wouldn't have had to rely on their defense. Thankfully, that hasn't really happened since those games, and the offense's efficiency has steadily increased since. This has to continue into the playoffs for the Chargers to keep winning games. When given the opportunity to take a 2+ score lead over a team, they have to do it to ease the burden on the defense. Hopefully they will.

Philip continues to climb the quarterback charts. He leads all quarterbacks in DVOA (value per play), and has improved to #3 in DYAR (total accumulated value), behind Tom Brady and Peyton Manning. There seems to be a good chance he'll pass Manning, especially if he plays limited time the next two weeks, and an outside shot at catching Brady. To finish #1 in DVOA and #1-3 in DYAR is pretty incredible.

Vincent Jackson still leads all receivers in DYAR, and is #2 in DVOA, again behind Robert Meachem.

Antonio Gates leads all tight ends in DYAR by a wide margin, and is also #2 in DVOA behind Ben Watson.

Advanced NFL Stats is another objective ranking site that measures team efficiency differently than football outsiders. Their Week 16 Team Efficiency Rankings have the Chargers as #3, behind Indianapolis and New Orleans. Why the disparity between ANS and FO? Someone asked this question in the comments to this week's rankings, and the site's author responded basically that he weights things differently than FO does. FO weights everything equally, while he weights passing offense the most, because he finds that's the thing most correlated with winning. Also, he feels that while FO's model is more explanatory (i.e., explaining what's already happened), his model is more predictive. This would appear to bode well for San Diego's playoff hopes.

Jeff Sagarin does objective rankings for USA Today. His Week 15 ratings have the Chargers ranked fourth, behind the Colts, Saints, and Patriots. These rankings are based on wins and losses, as well as points for and against. You can check out his methodology on the site.

The last thing we're looking at today is Beatpaths, a site that ranks teams based solely on who they've beaten. Here is their Week 15 chart. The chart has San Diego on basically the same footing as the Colts and Saints, while their more detailed rankings has the Chargers somewhat below both teams (they haven't posted Week 15 yet, but that was the state last week).

The fortunes of the Chargers continue to rise and fall with the passing offense. Most advanced stats seem to bear that out. This will probably make for some exciting games in the post-season, but it also means that the Chargers can beat anyone they play. According to FO, the best pass defense the Chargers can face in the playoffs is Denver's, which ranks second. After that is Baltimore at #6, and then Indianapolis at #10. The Bengals rank #12, and the Patriots #19. It doesn't seem likely that they would face either Denver or Baltimore in the Divisional round, and either of them would have to travel to San Diego. The Chargers have shown an ability to pick apart the Denver defense in Week 11, and the Baltimore one in Week 2. Moreover, either or both of them could easily miss the playoffs, and either or both could get knocked out in the Wild Card round. A likely scenario seems to be the Chargers facing either the Patriots or Bengals in the divisional round. You'd have to like San Diego's chances in either of those games.