So, let me just say, this past weekend has to rank pretty high up there among all-time sporting event experiences for me. Now, I have been to quite a few sporting events in my lifetime (Super Bowl 27 in SD, 1998 World Series game 4, 2002 World Series game 7, all Charger home playoff games since 2004), but this game is near the pinnacle.


I arrived at JFK airport on Friday morning at 6am after taking a redeye flight from Orange County. As I boarded the train into Manhattan, I knew this weekend had the potential to be either really great, or really disappointing. The first thing I noticed on the train was what appeared to be an odd abundance of Yankee fans wearing an array of Yankee gear. Now, I know the Yankees just won the World Series, but this was a little different. I had read the day earlier that the Yankees were going to have their victory parade that Friday afternoon, and with it being so early, I had hoped to miss any residual people traffic when I took the train in. Only after I boarded the train and found no seat available (for my hour trip into the city) did I come to the realization that I was completely mistaken. This was definitely NOT the way I wanted to start my weekend (especially considering I absolutely detest the Yankees too).
On Saturday afternoon, some family members and I decided to go to Liberty Island and the Statue of Liberty. While waiting for the subway, I noticed a couple of guys wearing Chargers jerseys. We all boarded the same train, and they also happened to get off on our same stop. As we exited the subway, I asked the guys if they were going to the game and they said yes. They were from the east coast (not NY though), and I told them that I came out from CA just for the game, and they were impressed. This was my first sighting of people wearing Chargers gear, but definitely not the last. Things were looking up.
We took a ferry to Liberty Island, and as we walked around the island, I noticed a few more people wearing Chargers gear. They appeared to already be excited for the game, because whenever they would see anyone wearing Chargers paraphernalia, they would call to them, give them high fives and yell "Go Chargers!". I was definitely not expecting that. But it was about to get even better. We waited in line for the next ferry to return to Manhattan, and as the ferry pulled in, a loud chant of "Let's go Chargers" rang out from ferry's top deck. There stood about 10 Charger fans wearing jerseys and all, yelling at the top of their lungs to all the Charger fans below waiting in line. It was awesome! People looked on, stunned as these rowdy Charger fans streamed off the ferry chanting and giving high fives. I had a feeling right there that tomorrow, game day, was going to be a great day.

On gameday, I decided to take the train to the Meadowlands. At the train station, there were people everywhere wearing Giants or Chargers gear, with the ratio being about 5 to 1. I was dressed in my LT authentic home jersey, Chargers fleece jacket, Chargers beanie, and my Reebok Chargers shoes . People for the most part kept to themselves and everyone was pretty mellow. After a little train delay, we arrived at the Meadowlands, and the scene reminded me of the parking lot at the Q.
The train to the stadium is a little unique in that it does an almost complete circle around the stadium before it stops, so you are able to get a pretty good view of the tailgating and stadium. For the most part, the place was packed, just as you would expect.
I exited the train and now my priority was finding John. Smoke billowed upward from all the bbqs, radios were blasting, and not a Charger fan in sight. This is not good. I endured a little heckling and proceeded to make my way through the parking lot around the stadium. I am a pretty big guy (6'-2", 210 lb) so I was fairly comfortable walking around, expecting a little heckling while I searched for John. 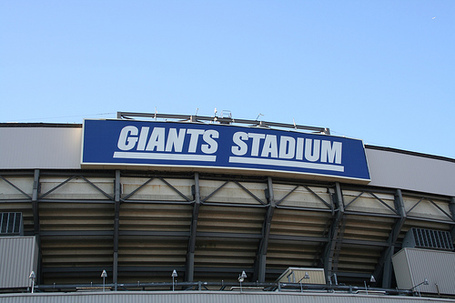 As I reached some of the outer parking lots, I saw some more representation of the Chargers, which was definitely a little more comforting. Then I saw it. Four or 5 buses surrounded by a crowd of Chargers fans. This must be the tailgating party from MJ Armstrongs that I had heard about. It felt like I was in the Q parking lot for a second, but there wasn't much time for me to linger. I had to find John and get some beers in me; game time was only about an hour away.
After some more friendly heckling and more searching, I finally found John. A few beers later and I was in full tailgate mode. Patrick (calipatrick) and his fiancé ended up stopping by and we took some pictures. 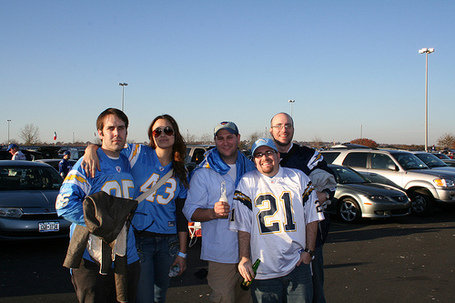 (Patrick, his fiance, Mike, John and myself prior to the game)

Soon it was time to head into the stadium. John's friend Mike was accompanying us (as a bodyguard), and we had all consumed a decent amount of beers (some more than others). This was going to be fun.
Entering the stadium, Mike started heckling of his own. He starting chanting " J ...E....T...S....." or "Let's go Rangers!", and in typical New York fashion, people would tell him to shut the F up, or that he was a moron. All in good fun. The seats we had were awesome. Right around the 20 yard line in the second level. 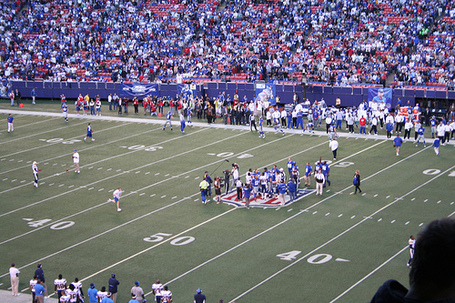 John and I had a conversation about how Giants stadium was very similar to the Q (circular ramps on the outside, similar sight lines), except for the grass versus the artificial turf. It's almost ironic that the Giants (and the Jets) will be playing in a new stadium next year, and the Chargers will not. I guess that's the reward for winning a Super Bowl. The Chargers really need to get a new stadium deal done.
The game started and it was time to get serious. And by serious, I mean more beer drinking and more heckling from Mike. On one trip to the bathroom, a Giants fan even told me I needed to watch my friend (Mike) because he was going to get into trouble. Apparently this guy has never been to a Raiders v. Chargers game. Overall though, the Giants fans were well behaved and good-natured. 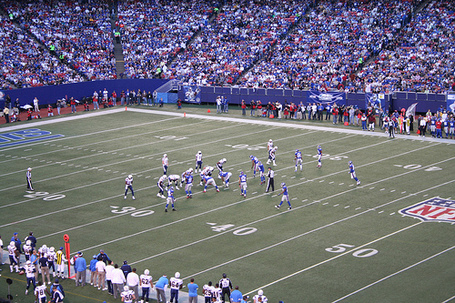 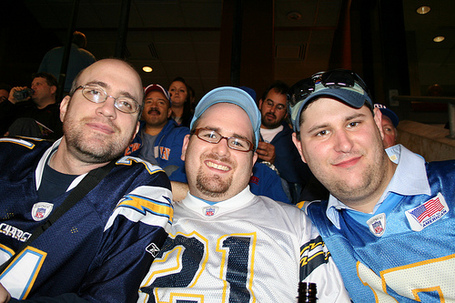 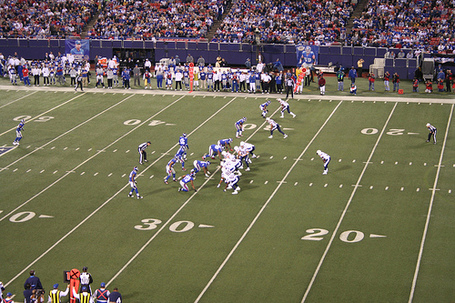 Anyway, we all know how the game ended up. It was almost surreal to see our section half empty after the Chargers scored at the end, almost as if they all disappeared instantaneously as John, Mike and I screamed at the top of our lungs and celebrated the come from behind victory. As John mention in a previous post, the turnout of Charger fans was more than I think most people expected. And seeing Charger fans linger in the parking lot after the game savoring the victory made this trip that much better. 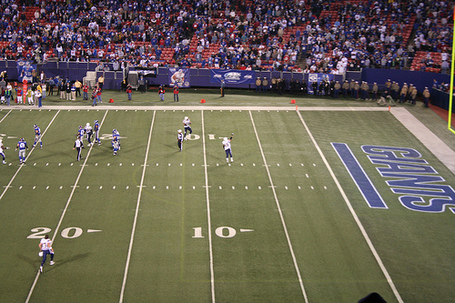 (The final play of the game...Luis Castillo pointing to the crowd as Shawne Merriman does his lights out dance, and Philip Rivers sprinting onto the field to join the celebration) 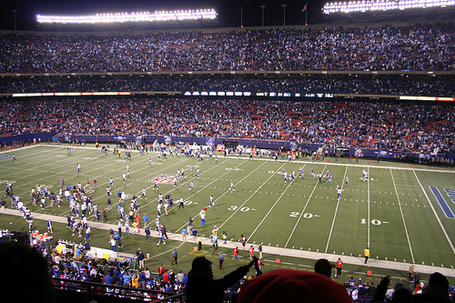 I want to thank John for the ticket to the game and for being the nicest guy I could imagine. Watching a game sitting next to him was truly enlightening. It is one thing to watch a game as a fan on your couch or in a bar, but watching with someone who is knowledgeable, is able to identify all the players on the field, recognize formations and plays, and generally "knows" football is almost like having the coach sit right next to you. It was an amazing experience and I thank you. John, when you come out for a Charger game, the beers are on me. And make sure to bring Mike as well, it wouldn't be the same without him.