When the Chargers schedule initially came out, I remember looking at it and thinking to myself, "I'll take 5-3 at the halfway point."  Well, the Bolts are there and the only difference in the situation is that they're looking up at the Broncos.  Still, if the season were to end today the Chargers would be in the playoffs.

It has been a rocky first-half though.  The team has lost one of it's defensive captains, replaced the starting SS and benched the future starting CB (probably).  Also, Brandon Siler started a couple of games and wasn't as bad as everyone feared.  All in all, a good 8 games.  However, some myself remains......like who won the prestigious BFTB Half-Season Awards?

Chargers' Coach of the Half-Season 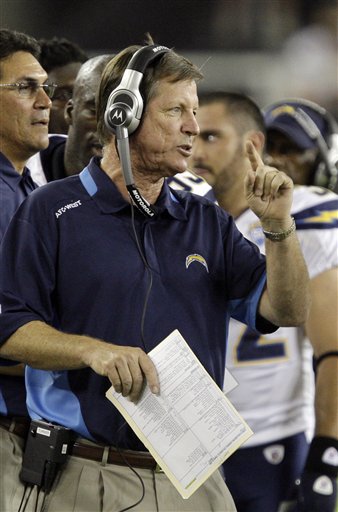 I remember watching a video clip of Norv giving an interview earlier in the season.  I believe it was after the Pittsburgh loss.  He was being questioned about his job, and his response was something along the lines of "I don't really care what people think."  I remember thinking that it was just a cliche line, but I'm starting to think it's true.  Norv never seems to be rattled by the constant criticism of the fans and media.  Isn't that who you'd want coaching your team?

Turner has done a great job of keeping control of the locker room during a rough patch of games, and they're growing together now (as evident by his hug with LT).  He deserves praise for that.  He also deserves praise for making the calls for a top 10 offense without a semblance of a rushing threat.

Is Norv ever going to coach a 14-2 mistake-free team that eventually wins the Super Bowl?  Who knows?  Not many coaches can.  However, with each passing year I'm confident that this team will always be competitive with him at the helm.  His steadiness is a big reason why.

Chargers' Offensive Player of the Half-Season

He has been ridiculously good.  His playoff games in the 2007 season cannot even compare to the games he's put up every week of this season.

VJ's numbers are incredibly consistent when you compare his stats by quarters, by halves or even by down.  88% of his catches have been for first down!  He leads the team in receiving TDs with 7.  The next highest player has 2.

In 2009, Vincent Jackson has been every bit as important to the offense as Philip Rivers.  If he isn't with the Chargers in 2010, it will be the shock of the century.

Chargers' Defensive Player of the Half-Season

Things I just realized in the last 30 seconds....

Anyways, back to the award.  Eric Weddle has been ridiculous this season.  Talk about fitting out a stat sheet...

Every box has a number in it!  On top of those stats, he also is second on the team with 4 defended passes.  He's been solid against the run and the pass, and has even found some time to lay a handful of big hits on receivers coming over the middle.

Much like Shaun Phillips has been better with the recent re-emergence of Shawne Merriman, Weddle has been even better with Kevin Ellison/Paul Oliver playing next to him since Clinton Hart was waived.

Chargers' Rookie of the Half-Season

Here's my argument for Ellison over Louis Vasquez and Larry English.  Vasquez almost won the starting job by default due to Kynan Forney's neck injury in camp, and English has yet to make a big splash in any game.  Ellison was a 6th round pick and 3rd on the depth chart at the beginning of the season, and is now starting and playing on 90% of the snaps.  That not only shows the talent he possesses, but it shows that he didn't give up and continued to fight in practice for the spot even after it looked like he wouldn't get a shot this season.

By the way, anybody else realize that Jackson, Weddle and Ellison all have birthdays within 10 days of each other?  Random.....

Chargers' Comeback Player of the Half-Season

It's funny how confused he looks in that picture.  Anyways, I'm not even going to bother posting his stats because they don't matter.  He's on pace for a Jamal Williams-type season, where the stats don't show up because the offense he's facing is too busy double and triple-teaming him.

He's been a beast this season and has earned his big contract.  The key has been his health.  For the second consecutive year, he's managed to stay on the field.  The difference this year is that he's practicing and generally seems to be avoiding his usual nagging injury.  This is the player we all fell in love with in 2006 and 2007.

Chargers' MVP of the Half-Season

Was there ever any doubt?  Similar to Luis, Philip may be having his best season yet but you wouldn't know it by looking at the stat sheet.  Without a rushing attack to speak of, an offensive line to block for him or a defense for the first quarter of the season, Rivers managed to keep himself healthy and dangerous.

His game-winning drives against the Raiders and the Giants speak for themselves.  What has impressed me the most has been his ability to avoid mistakes while avoiding pass-rushers on seemingly ever play.

With his strong play, Rivers has solidified his spot as a top 10 QB in the league and has even made some fans in the fanbases of opposing teams.  Now it's the Chargers' job to give him the support he needs to finally get that Super Bowl ring that both Ben Roethlisberger and Eli Manning have gotten.