If I Were the San Diego Chargers' GM: Q1 Review

Share All sharing options for: If I Were the San Diego Chargers' GM: Q1 Review

My greatest love, as it pertains to football, is personnel.  Even during an entertaining, late season game my brain can't help from scouting the players on my screen and thinking about improvements that need to be made to the roster.  Even in the very early stages of an unpredictable season, I love nothing more than to throw my GM hat on and pretend I'm A.J. Smith.

I have two dream jobs.  Well, three I guess.  Number one would be playing Quarterback in the NFL.  However, I'm about 4 inches shorter than Drew Brees and 9 inches shorter than Philip Rivers, so that might be hard.  I will admit that I've always been an accurate passer in my backyard and even won my wife a stuffed duck on one of those boardwalk games where you have to hit the target inside of the swinging tire.  Still, that one ain't happening.

My second dream job would be as GM in the NFL.  This is the reason I look through stats endlessly and the reason I've read Ernie Accorsi's book twice already.  If I could one day be the GM of any NFL team, I think I'd skip everywhere instead of walking.  Also, I'd do it for free.

My third dream job I'm practically doing.  It would be to write about the San Diego Chargers.  To share my passion and contribute words to the world that are appreciated, even if it's by a small group of people.

So while writing about it, I'm going to be doing quarterly looks ahead to see the potential holes in the roster in 2010 and to tel you what I would do if I were Mr. Smith.  My first attempt at this is after the jump.

Since I don't want to write this post two different ways every time I do it, let's go off the assumption that there will be a new CBA in place by time free agency rolls around.  Here's who the Chargers are at risk of losing:

Look, the WR situation is not as bad as it might seem.  Where will we find the money to pay VJ?  Simple.  We'll give him Chambers' money.  Chris is one of the top 20 WRs in the league in terms of base salary.  Moving that money over to Jackson, plus VJ's current salary and a little extra, should be enough to keep this dynamic WR in San Diego for another 5 years as least.  That's a move that I would do as GM.

Manumaleuna can be kept because he'd probably be cheap.  He's an effective blocking TE who can fill in at OT or FB in a pinch.  Unless somebody else falls in love with Dobbins, I'd keep him around for run support, depth and his special teams prowess.  McNeill is kept because he's an adequate LT that has tremendous potential.  It's really hard to find a good LT these days and even harder to try to play without one.

Merriman can go because his price tag is too high.  The team cannot afford to be paying starter's money to 3 OLBs.  Also, the Chargers could do worse than having Antwan Applewhite and Jyles Tucker as the backups.  I'd like to keep Osgood, but don't see him staying.  Somebody that likes tall receivers (Bengals?) will give him a chance to catch balls and he'll be gone.  Chambers, Sproles and Whitehurst will all cost much more than they're worth on the free agent market.

It would probably cause too many issues to slap the franchise tag onto Merriman.  He wouldn't want to play on the one-year deal, he'll feel he's getting underpaid, etc. etc.  I'd personally go without a franchised player in 2010.

The 2009 offseason was the first in a few years where there was legitimate holes on the roster.  As of right now, I don't know that the team did a very good job of filling all of those holes.  In 2010, those same weaknesses exist along with new ones.

Running Back - The bad news is that LT can't take the beating of a starting RB in the NFL anymore.  The good news is that his restructured contract makes him cheap enough that he could be the second option in the ground game without killing the cap.

Trying to buy a running back as a free agent is absurd, unless you find a diamond in the rough (like Priest Holmes).  It's even harder when there's only a couple of decent free agents RBs.  After this season, the only RBs that might become free agents (they could still sign a contract with their current team) that have any starting experience are LenDale White, Pierre Thomas, Chester Taylor, Willie Parker and Le'Ron McClain.  Jerious Norwood is an intriguing name, although he hasn't started much at all since being drafted.  I don't think any of these guys are worth the money that they're going to get, so I point my eyes towards the draft.

I think it is absolutely, 100% necessary to use the Chargers 2010 first round draft pick on a running back that can start immediately.  Unfortunately, this draft class currently looks thin at RB.  Perhaps it's just too early.  Even so, I have my eye on Clemson's C.J. Spiller and from the looks of it he might want the chance to apprentice under Tomlinson. 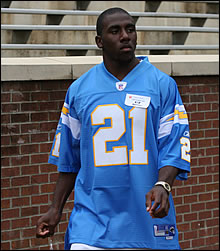 Strong Safety - From what I've seen, Kevin Ellison is not the answer at Strong Safety.  He's the Brandon Siler of that position.  He's a strong, big hitter than is good against the run but will get burned if he has to cover anybody downfield.  I don't think Clinton Hart or Steve Gregory are good enough that I feel secure in having either of them as my starting SS in 2010.

I'm very intrigued with C.J. Spillman as an option here.  He was very fast and hit really hard during the preseason.  He reminded me of Melvin Bullitt, who I am a big fan of.  I'm hopeful that the only reason he's listed as a FS and saw time their in the preseason is because the team liked what they saw from both him and Ellison and did not want them competing for the third SS job.  If I was A.J. Smith, I have a meeting with Norv Turner and Ron Rivera and ask them point blank of Spillman is a viable option to start at SS before I make any other moves.

Let's assume they say no.  "There's nobody on the roster we're excited about starting at SS."  Well, let's see what else is out there.  The aforementioned Melvin Bullitt (RFA) is part of a strong class of free agent Strong Safeties that also includes Atari Bigby, Abram Elam, Dawan Landry and Brodney Pool.  These guys may cost more than trying to find a decent SS through the draft, but with more important needs to fill with rookies I think the Free Agent route would be the one to take.  Any of those 5 guys mentioned, with the possible exception of Brodney Pool, would be a great improvement over Hart and Gregory.

Defensive Tackle - I originally thought this position was a HUGE need, but it may not be by the end of this season.  If Ogemdi Nwagbuo and Vaughn Martin both show improvement during the season, to the point where they could both be competent starters on the defensive line, then the Chargers have incredible depth in 2010.  That would leave them with 5 legitimate starters (Nwagbuo, Martin, Luis Castillo, Jamal Williams, Jacques Cesaire) and no need for anyone beyond that besides maybe Ryon Bingham.

If neither of them pan-out, the Chargers will continue to look for a young replacement for Jamal Williams.  There are plenty of good DTs in the 2009 draft class, including 365 lb. Terrence Cody, so that would be the way to go there.  As for right now, Shaun Rogers would be someone that I would inquire about but it would cause problems for the future of the defensive line.  Rogers is signed for 5 seasons after 2009, and considering the Chargers would have to give up at least a first round draft pick to get him they would not be eager to dump him once Jamal Williams came back or one of the young kids started to show promise.  That means they would have to give up on J-Will, OG and/or Martin and I don't think they're ready to do any of that.  If I'm A.J. Smith, I'd like to stand pat and see how the young kids play for the rest of the season.  However, the idea of Rogers pushing the line around with Nwagbuo subbing in and Martin playing backup DE seems like one I'd have to jump on if the price was right.

Center - This one kindof kills me.  After talking with him at training camp, I can say that Nick Hardwick is one of the nicest people I've ever met.  Not one of the nicest Chargers or nicest football players, nicest people.  I also think he's a fantastic Center when he's able to stay healthy.  I just think the Chargers need a better backup plan for when he gets injured.

Tyronne Green brought some hope.  He was a very good OG at Auburn, and they hoped to turn him into the backup Center.  Considering he's the 3rd Center and probably the 5th Guard, it's safe to say this pick has yet to pan out.  If he shows something before next season, great.  He can be a solid Center and nobody else is needed.  If he shows nothing, he needs to be cut and a legitimate Center needs to be drafted.  It's damn near impossible to find a decent Center as a free agent because of how valuable they are to each team's offensive line.

It's obviously not a full plan, but there's direction there.  Sign Vincent Jackson to the contract he's worth.  Scout every college RB in the country.  Aggressively pursue the free agent Strong Safeties.  Make a decision to trade for a NT or put your confidence in Nwagbuo and Martin for the future.  Find a real Center to backup Hardwick.  The rest will fall into place as the season goes along, and I hope some of these weaknesses turn into strengths.  Right now, that's what I would focus on if I were the General Manager of the San Diego Chargers.