Another week, another preview.  This one should be significantly more optimistic than the past few, though.  It's no secret that I think these two Kansas City Chiefs games this season will be easy wins for the San Diego Chargers.  I don't buy into the mystique and I don't buy into last year's close games determining how these games will go.

Last year's Chargers games were perfect mis-matches for the Chiefs.  Clinton Hart couldn't come close to covering Tony Gonzalez (nobody on the Chargers' D could), when Mark Bradley was hot was when Antonio Cromartie was having trouble staying with fast receivers downfield and Dwayne Bowe took advantage of the Chargers' weaknesses at Safety.  More than anything, though, Tyler Thigpen and that Pistol offense worked wonders against the Bolts' defense that, in all honesty, isn't very fast and didn't throw a lot of complicated pre-snap looks at the rookie QB.

This year I think things are different.  The only real receiving threat on the team is Bowe.  He'll probably get his numbers, but if you shut down the rest of their receivers the Chiefs will have a difficult time putting together long drives.  And here's a big kicker.....with a QB that holds onto the ball too long and an offensive line that's struggling, the Chargers might actually get a pass rush.

A full breakdown of the game and stats is after the jump. 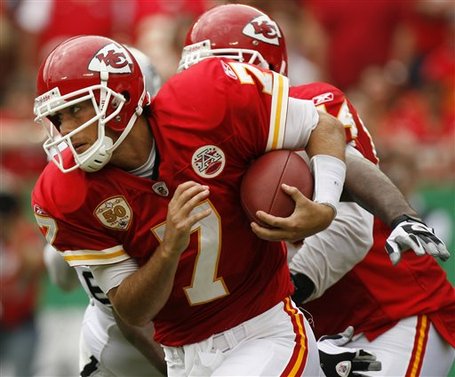 When the Chiefs have the ball

After bringing in Todd Haley to coach and Matt Cassel to lead the offense, the Chiefs were hoping to spread things out and create a pass-first attack similar to Arizona's.  That hasn't worked out too well thusfar, mostly because the Chiefs don't have the weapons to "spread things out" and the running game has offered no help in bringing opposing Safeties up for help.

Kansas City's offense ranks 30th in the league in offensive yards per game and 25th in points per game.  There are some bright spots, like the 9th ranked Time of Possession, but then there are some not-so-bright spots like having the 4th most fumbles in the league.  The biggest problem with the Chiefs offense, because they only have one true offensive weapon, is third downs.  Their 21% conversion rate on third downs is not only dead last in the league, it is significantly lower than the third down conversion rate of the 31st ranked team (OAK - 26%).  This is great news for the Chargers, who have struggled to get off the field because of poor play on third down.

In the preseason I pointed to the extraordinary number of times Cassel was sacked as the Patriots QB as evidence that he held onto the ball too long.  This season that same issue has been paired with a bad offensive line, leading to 22 sacks on the Chief's signal-caller.  That ties for second in the league with the Lions and behind only the Packers.  Considering the Chargers face neither of those teams this year, this is going to be the best opportunity for players like Larry English, Shaun Phillips and Shawne Merriman to get to the QB and pad their stats.

On the season, the Bolts rank 23rd in yards allowed per game and 28th in points allowed per game.  They're allowing 141 rushing yards per game, good for 27th in the league.  The passing defense has been solid though, ranking 13th in the league in yards allowed.  Although the team's 7 sacks makes them the 29th best team (or 3rd worst) in the league on the pass-rush, the secondary's strong play has put them among the top 10 teams in 40+ yard passing plays allowed and 20+ yard passing plays allowed.

Advantage: Chargers. This will not be the game where Matt Cassel finds his down-field touch.  Quentin Jammer and Kevin Ellison should spend a lot of time double-teaming Dwayne Bowe to keep him in check.  I'm hopeful that the Bolts get Cassel to the ground at least a couple of times, which should hopefully turn into a turnover or two.  If the Chiefs find a way to consistently grind out long-drives and score TDs against the Chargers, I will be very surprised. 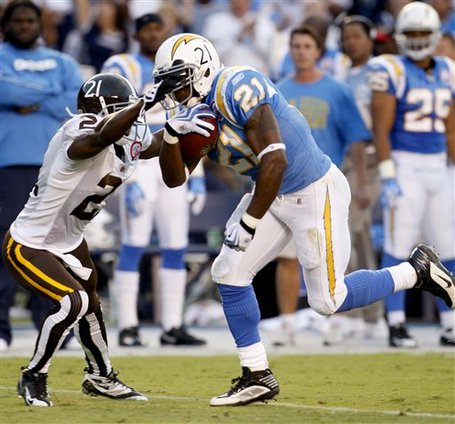 When the Chargers have the ball

After their best game of the season against the Broncos, the Chargers' offensive ranks remain relatively the same.  They're still in the middle of the pack in terms of offensive yards (14th), towards the top in terms of points per game (9th), struggling with the running game (32nd in rushing yards per game and yards per carry) and awesome with the passing game (5th in passing yards per game).  The pass protection hasn't been great, especially at Center and RB, but Philip Rivers has done enough to make that group only 10th worst in terms of sacks allowed.

The Chargers are in trouble if the Chiefs are having success rushing the passer, and have tall cornerbacks to cover the Chargers' tall receivers.  The 29th ranked defense for yards allowed per game isn't promising, and neither is being 24th in point allowed per game.  KC is ranked 25th in passing yards allowed, but they have faced some pretty tough passing offenses already this season.  What really gets me excited for this matchup is that Rivers may actually get the chance to throw the ball consistently without having to run for his life.  KC's pass rush has yielded only 9 sacks, putting them one ranking spot better than the Bolts.

Also, and this may sound foolish, I'm expecting a big game from LaDainian Tomlinson.  Essentially, LT has been healthy and used in only two games this season.  I know we're 2-3, but everyone here knows how much I worry about LT's mileage.  I think the rest has been good for him and I do think he looked like an effective RB against the Broncos (4th best run defense in the league).  The Chiefs' are ranked 25th in terms of rushing yards allowed per game, and RBs are averaging 4.5 yards per carry against them this season.  They have allowed four rushes for over 20 yards this season, which is nearly one per game and makes them 10th worst in the league for that statistic (for the record, the Charger have allowed only two 20+ yard rushes, tying them for 19th worst).  I think LT is out to prove to himself, the league, the fans and especially the coaching staff that he's healthy and should be the main RB in this offense at all times.  I'm not saying I'm expecting 200 yards and 3 TDs, but 100+ and a score would go a long way towards a victory.

Advantage: Chargers. This is a no-brainer.  One of the better offenses in the league against one of the worst defenses in the league.  Even if the Chargers' D isn't up to the task of shutting down the Chiefs' offense, the Bolts should be able to easily out-pace KC in a shootout.

With four WRs that are over 6'2", one thing that I've been looking at every week is the height of opposing CBs.  The defenses that the Chargers have struggled against (Raiders, Broncos-2nd half, etc.) have been ones with at least 2 CBs of 6' or taller.  If all of your CBs are 5'10" or shorter, there will be some 7" mismatches that can't be overlooked.  Let's look at the Chiefs' secondary:

Not bad height on their secondary.  I'm sure Rivers will attack Flowers whenever he's up against Vincent Jackson or Malcom Floyd, but that probably won't be often.  Still, I think the Chargers' gameplan going into this game should be able ball control and instilling confidence back to the running game.  If it's not working, Rivers can win the game by himself like he always does against the Chiefs.