Share All sharing options for: Kyle Orton vs. Philip Rivers

I don't want to sound like a jerk, but I always liked Kyle Orton.  Don't get me wrong, he's not Drew Brees, but when he was forced into starting 15 games for the Bears in his rookie season he led the team to a 10-5 record.  His completion percentage wasn't high, and he threw more picks than he did TDs, but he did a very good job of managing the game.  Especially for a rookie.  I remember thinking to myself, "Well, the Bears have a decent QB for the next 5-6 years now."  Then the Bears sat Orton and started Rex Grossman instead.

Neither QB was lighting the world on fire, but Orton just won games.  Grossman won a few as well, but the difference between the two was that Orton was getting better.  In his three years of playing with the Bears, his QB rating went from 59.7 to 73.9 to 79.6.  His completion percentage went from 51.6% to 58.5% in that timespan, and you could argue that his receiving corps got worse as time went on.  In short, Orton was getting better.  He was getting more accurate.  In 2008, for the first time in his career, he threw more TDs (18) than INTs (12).  When the Bears became a possible trade partner for the Broncos, I'm sure Josh McDaniels looked at those improvements and saw a player that would flourish in a pass-happy spread offense with playmaking WRs, and that's exactly what has happened.

After the jump, we go deep into the stats to find out who is having the better season thusfar: Kyle Orton or Philip Rivers? 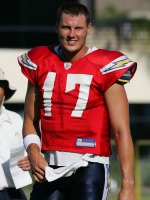 As it stands right now, Philip is not having a season on par with his 2008 season.  However, he's dealing with zero running game instead of a halfway decent running game.  Also, the defense (which was already bad) has regressed.  Usually the first time Philip gets on the field he's already playing catch-up.

The biggest factor in Rivers' regression this season is the offensive line, or lack thereof.  He's been sacked 10 times this season, and has thrown the ball away quite a bit while avoiding pass-rushers.  If he's going to get better as the season goes along, he's going to need more protection and a better running game.  A healthy Louis Vasquez and LaDainian Tomlinson goes a long way towards accomplishing that.

There's no denying that Orton is playing better football.  Both players have scored the same number of touchdowns, Orton has thrown less picks and is completing a higher percentage of his passes.  He's also been sacked less (1.6 sacks per game) than Rivers (2.5 sacks per game) and has generally had more time to pass.

The great equalizer here is everything besides the Quarterback.  Orton may be posting better numbers, but he also gets to lean on the 5th ranked rushing offense and 2nd ranked defense (1st in points allowed).  Philip Rivers gets to play with the league's worst rushing offense (32nd) and the 26th ranked defense (25th in points allowed), and is therefore under more duress.