The steel curtain is back in no uncertain terms.  This defense was ranked number one or two in virtually every category.  The key to their defense is the blitz; they don't call them blitzburgh for nothing.  Running the 3-4 like the Chargers they bring pressure from the outside linbackers from the edge.  James Harrison just won the defensive player of the year based on his 16 sacks and seven forced fumbles.  On the other side Lamarr Woodley with 11.5 sacks; those two book ends place enormous heat on the quarterback.  They excel at stunts and delayed blitzes; where the blitz is coming from is always well disguised.  Philosophically they are almost the exact opposite of the Colts defense; instead of bend don't break they go with a lot of man to man coverage and go for the three and outs. 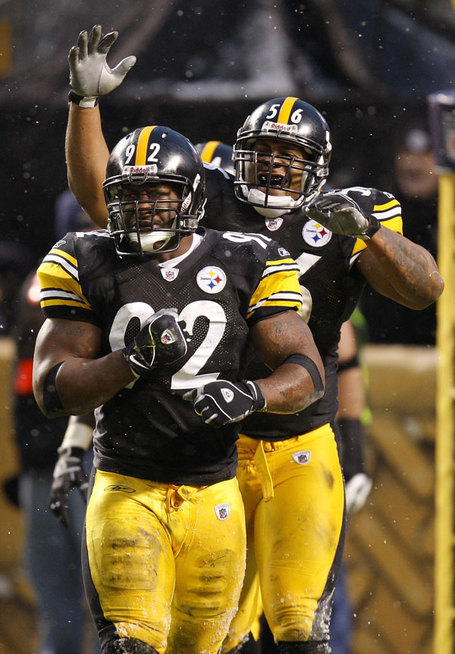 One area that has to concern the San Diego offense is how effective Sproles can be in providing blocks for Rivers in 'Max Protect' types of packages.  We may end up seeing Hester more than we expect as the tailback; I have no idea how effective a blocker Bennett is.  On one of the inside linebacker positions James Farrior is leading this defense on tackles and also serves as its captain.  Aaron Smith is a force on the front line; he ended the season with five and a half sacks and is a brick wall against the run.

The maestro of this defense is Dick LeBeau, and it stresses all eleven players doing their job.  He invented the zone blitz; and is constantly innovating new schemes to put offenses off stride.  This is his second stint as Pittsburgh's defensive coordinator, he has thirty years in coaching altogether.  The interesting thing about this defense is that they don't need to sell out against the run or pass; their base defense can take care of both with equal efficiency.

The secondary starts with Troy Polamalu at safety; he ended up with 7 interceptions and flys all over the field.  He is a key playmaker on this defense and will often get brought on the blitz as well.  Ike Taylor and DeShea Townsend are the corners; they were out with injuries when these teams met back in week 11.  Even with the backup corners the Chargers were unable to move the ball effectively against this secondary.  Neither corner has amazing statistics, but coupled with the pressure the OLB's bring it makes any passing attack tough.  This is not a secondary that gets burned often; the Chargers will see more success if they can scheme to catch linebackers in coverage.

In the regular season the Titans were the only team able to put up more than 30 points on this defense.  Mostly they scored on short fields based on mistakes by the Pittsburgh offense; but they also put together an 80 yard drive that included a lot of short passes mostly to the right side, but then breaking an unusual 21 yard break from the Titans Chris Johnson.  San Diego also put together an 80 yard drive against this unit in the beginning of the fourth quarter.  It consisted of some good running by LT coupled with passes over the middle and to the right.  Chipping away with high percentage short passes does seem to be one avenue to moving the ball.  LT picked up the Chargers longest play out of the backfield. I wonder how effective a spread offense might be; it would be interesting to see the Chargers line up Jackson, Chambers, Gates, Floyd and Naanee and see if someone pops free.