Can Pittsburgh be Beaten?

Share All sharing options for: Can Pittsburgh be Beaten?

The Steelers are going to be extremely tough to beat in their own stadium in January.  The key to the Steelers is obviously an outrageously talented defense that defends well both against the run and the pass.  How good are they?  They didn't allow a single 100 yard rusher nor a three hundred yard passing game against them all year.  They allowed only 223 points over the entire season, just under 14 points per game; when they played the Chargers this season the Bolts could muster only ten points.  The Steeler offense is average; but coupled with the shutdown defense that is more than enough to notch a lot of wins. 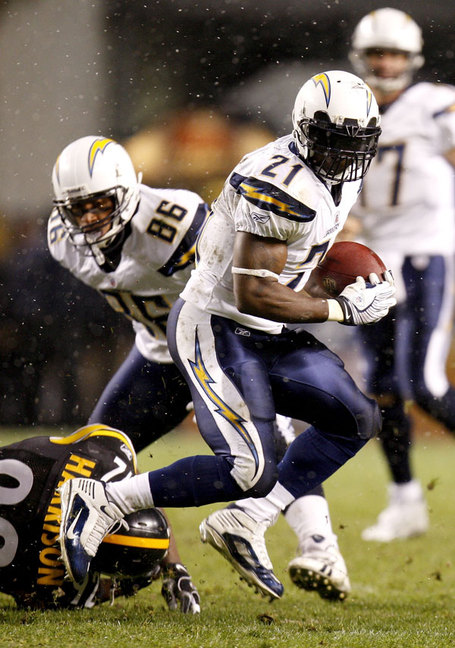 Even with that stainless steel defense; the Steelers did lose four games over the course of the year.  Philadelphia beat them early in the year 15-6.  Philadelphia put monstrous pressure on Roethlisberger with 9 sacks and forcing three turnovers.  The defensive scheme of the Eagles badly confused the Steeler offense who were not able to run or throw.  The Eagle offense didn't achieve much, but didn't have to.

The second loss of the season was against the NY Giants.  In this game the Giants knocked on the door repeatedly, but settled for four field goals.  Roethlisburger was sacked five times and threw four interceptions.  The Steelers were playing without a number of key players on defense and finally tired in the fourth quarter surrendering a touchdown through the air to pick up the victory 21-14.

Indianapolis was also able to beat Pittsburgh at home.  It was a tough fight that again keyed off of Roethlisberger mistakes, he ended up throwing three interceptions and getting sacked twice.  Manning was able to capitalize with one lucky deflected pass going long, but was able to pass for two other touchdowns, one late in the half, the other at the end of the fourth quarter.  Indianapolis was particularly effective against Pittsburgh's running attack allowing just over two yards per carry.

Pittsburgh most recent loss was to the Titans who look to have blown the Steelers out 31-14.  That is a little deceptive as Roethlisberger threw the pick six late in the game trying to come back.  Roethlisberger was sacked five times and threw two interceptions.  The other key was five fumbles, leading to two more turnovers.  The Titans went +4 on turnovers and were the only team to gain more than 300 yards against the Steelers.  They also put together an 80 yard drive for a TD that consisted mostly of rushes and passes to their tight end Crumpler.

After looking at these games a few themes emerge.  Pressure on Roethlisberger is one key to achieving turnovers and getting a short field against this defensive unit.  The one long drive I see was keyed off shorter passes up the middle to the tight end; I expect that Gates could be huge in this game.  In these games Roethlisberger also didnd't play as well from behind; he threw a lot of interceptions when trying to forge a comeback.  The Chargers can't turn the ball over when they are in field goal range; they have to take every point they can get.   In three out of four losses Pittsburgh's running game was held to 3 or less yards per carry; shutting down the running game will be critical.

Teams do seem to catch Pittsburgh sometimes on deep plays later in the game; I would leave any gadget plays or stretch plays until the second half.  The weather will also weigh against the stretch type plays.  Scifres could end up being huge again if the Chargers end up swapping punts with Pittsburgh; if the Bolts can couple that with reasonable returns from Sproles the Chargers can gain a big field position advantage.  Pittsburgh punt coverage is bound to be better than the Colts however.  This is going to be a tough low scoring game; Pittsburgh in January is going to be a tough nut to crack.