Share All sharing options for: Vincent Jackson Arrested for DUI

Vincent Jackson was arrested for driving under the influence by the California Highway Patrol on Teusday night shortly after 2 AM.  The exact blood/alcohol content was not released.  He was driving along highway 52 near the 805 freeway.  He was released by 6:00 AM.  Jackson was having the best season of his career with over 1,000 yards; his season statistics are below:

The arrest is troubling not only for itself; but also because it his second arrest for this offense.  He was reportedly driving on probation for a prior offense.  It seems a pretty clear indication of some kind of drinking problem. 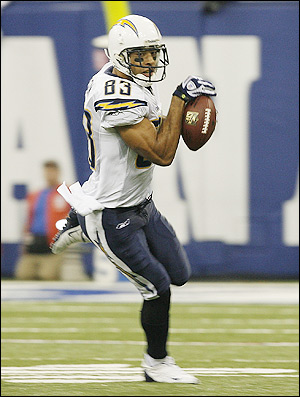 Most recently Jackson had no catches.  It is unlikely related to anything but the Colts secondary that was very careful to always have tight coverage on the dangerous receiver.  It brings up a number of questions for Chargers management; it is impossible that the case will be resolved prior to this weekend's game.  As difficult as the timing is, the Chargers should suspend him; if this is his second go around he clearly hasn't learned anything; there need to be consequences.