With Gates and LT injured you had to wonder how the Chargers would do against a Colts squad riding a nine game winning streak.  The Chargers have been in win or go home mode for five weeks now and managed to do just enough to win at home. 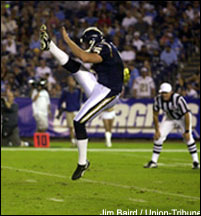 Quarterback - B
This is a tough grade, Rivers threw the pick and had another dropped on a deep throw.  He only gained just over 200 yards through the air; but almost as important is the number of throws he didn't make.  When he didn't see a play he would throw the ball away; and despite being sacked four times he avoided the strip sack.  And let us not forget his fabulous lumber to get close to the first down where he went in head first and then brought the QB sneak for a crucial first down.  Rivers did enough for the win.

Offensive Line - B
There were some nice holes created by the line coupled which led to 167 yards on the ground.  The line didn't do as well protecting Rivers, not only giving up four sacks but also allowing a lot of pressure and forced roll outs.  Considering the skill of Mathis and Freeney, it wasn't a bad effort and the run blocking was the best of the season.

Wide Receivers - C-
Almost a non-factor in this game.  Give credit to a great game by the Indianapolis secondary that kept Vincent Jackson to no catches.  Chambers caught for about 50 yards and Naanee chipped in about 15; but the wide receivers were scarcely an issue in this game.

Tight Ends - A
You expect your stars to come through in the big games and Antonio Gates did exactly that.  You want your tight end to take those middle routes against a Tampa two and that is exactly what Gates did.  An exceptional performance with the high ankle sprain.

Running Backs - A
Wow, LT gives a great start before going down with the nagging groin injury.  Sproles gets 23 carries and 105 yards on the ground plus 45 through the air.  Michael Bennett chipped in with 24 yards; but lets not forget perhaps the best performance.  In the replays of all three touchdown runs Hester could be found making a block that would key the big play; I have spent some time this season wondering if we had overpaid for Hester but he has really come into his own these last few games.

Defensive Line - A-
The line put pressure on Manning; he is tough to get to, but he was often having to scramble away leading to a sub par game from him.  Excluding the one deep strike Manning really didn't have a great day.  They were also good enough against the run, allowing just 64 yards, that the Chargers ended up staying in nickel for big portions of the game; in fact Cason ended up being the leading tackler.

Linebackers - B
Although they only picked up one sack, they brought a lot of pressure.  The one sack they did get was crucial putting the Colts back on their one yard line with two minutes left in the game.  Stephen Cooper was huge in calling defensive formations and also was the second leading tackler.  Jyles Tucker made a number of plays and was often chasing Manning if not quite catching him.

Cornerbacks - C+
Another tough one to grade; they were excellent except for two plays; a pass interference against Jammer and the blown coverage by Cromartie.  Late in the game Cromartie got just enough of the ball to cause the Colt receiver to bobble until he was out of bounds.  It is a little too easy to rationalize those breakdowns; and I like the aggressive coverage by Jammer, but those lapses really cost the Chargers.  They mostly held a potent offense to not many yards (with a few drops by Colts receivers), but mostly was almost not good enough.  I'm really liking the nickel package that puts Cason out there; he ended up as the leading tackler with a pass defended (PD).

Safeties - A-
Every time I see Stephen Gregory out on the field he looks slow and awkward; but damned if he doesn't usually get the job done.  Three tackles, two assists and the PD, I saw no blatant mistakes.  Eric Weddle is starting to look much better; he had three PDs, one of which probably should have been a pick.  He was also the teams third leading tackler.

Scifres was clearly pivotal this game.  I lose track of just how good he is when the defense breaks down; but when the defense performs and you are trading punts the ball inexorably creeps towards the opposing endzone; particularly in tandem with good punt returns by Sproles.  If you look at the game against Pittsburgh they outgained the Chargers almost by a factor of two and had

A great game plan that took what the Colts were giving.  Turner made good use of Gates and Sproles, I had some questions about stretch plays thrown by Rivers.  There were timeouts left near the end to stop the clock before the two minute warning; his game management was excellent.  In most ways he outdid Dungy in this game, Dungy blew a challenge that didn't look close to me, failed to throw another that could have been overturned and had a few offensive calls that left me scratching my head.  The Colts also looked more nervous when the heat was on, making a number of critical penalties on the final drive.  The defensive gameplan was also well done coming at Manning with lots of movement.  The one real breakdown was a failure of attention, not play calling.