This game was a classic; an epic of the first water.  The easy thing to say is that the Chargers have the Colts number; but that clearly isn't true.  Every game against the Colts comes down to the final play and today it was the Chargers who had the ball last.  In an ironic twist this game really revolved around two terrific defenses and special teams instead of the quarterbacks with all the gaudy awards and statistics.  Philip Rivers would end up with a passer rating of 60 with one interception and four sacks and a scant 190 yards.  Peyton Manning would get three hundred yards and a TD; but that is deceptive as 72 yards and the TD came on one quick snap and complete breakdown by Antonion Cromartie in coverage for the Chargers. 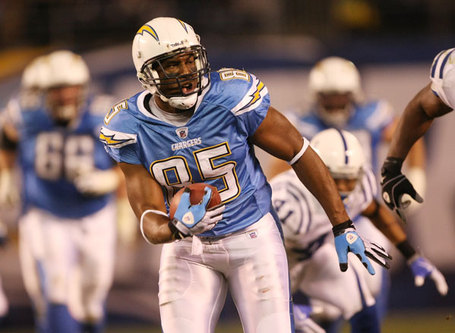 The game started well for the Chargers with Ladainion Tomlinson scampering around the outside edge for thirteen easy yards.  It was clear that he was running injured however as he couldn't seem to make a cut.  That was followed by a two yard run, a six yard pass to Gates who had the high ankle sprain, but then Mathis came up big for the Colts with a sack of Chargers quarterback Philip Rivers and the Chargers were forced to put the ball.  Scifres pinned the Colts back in their ten yard line; it was the first of many dazzling punts by Scifres.  Manning came out looking sharp, aided in part by a thirty yard pass interference call against Quentin Jammer.  The Chargers defense began the game shifting formations like wildfire until there were ten seconds left on the clock.  It did seem to baffle Manning just a bit and the Colts would end up punting from the Chargers 42; but in the battle of the punters Hunter Smith would prove to be much less effective.  He hit the touchback, netting only 22 yards.

The next drive Manning would come out looking every inch the MVP as he drove 81 yards for the TD making frequent use of Anthony Gonzalez.  If the first drive the Chargers defense had him off strive; he recovered quickly.  The Chargers next possession gained only 20 yards before ending in a punt against the stout aerial defense of the Colts.  But again Scifres would boom a punt that would pin Indianapolis back at their three yard line.  The Chargers defense only allowed the Colts five yards.  Rivers would get the ball at the Colt 44 after another punt by H. Smith.  Rivers made short work of the short field with a big pass to tight end Antonio Gates; and LT bolted in from the three yard line sprung by the first of many great blocks by Jacob Hester working as fullback. 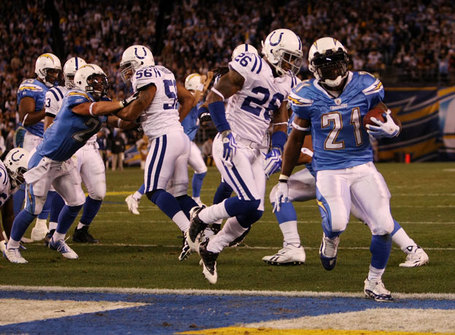 LT goes in for the score

The game was knotted up at seven.  Manning would engineer a drive back to the Chargers 25 yard line, but stalled out there and had to settle for the Vinatieri field goal.  The Colts were back on top 10-7.  On the kick return for the Chargers Sproles would make a nifty thirty two yard return that the offense squandered with a quick three and out.  Scifres would again uncork a magnificent punt that put Indy back at it's own seven yard line.  Again the Charger defense would hold the Colts and Rivers would get the ball back at the Indianapolis 45.  The combination of Scifres monstrous punting with almost no return versus Indianapolis' average punts with good returns by Sproles was a huge strategic advantage for the Chargers.  Once again the Chargers drove the short field and took the lead 14-10.  The drive ended this time with a nine yard run by Sproles, sprung once again by a fine block by Charger fullback Hester.  If you had doubts about the sagacity of paying a second rounder for Hester; they were largely gone by the end of this game. 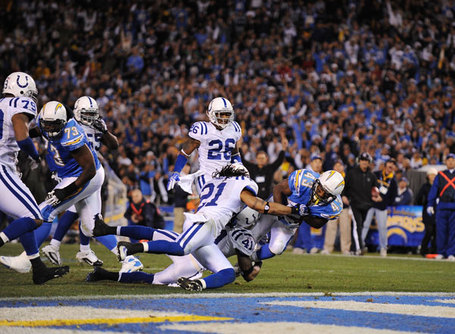 Sproles going in for the touchdown

The second half would begin with Indy driving well into Charger territory.  In what might be his last game of a magnificent career, Colts coach Tony Dungy made a gutsy call to go for it on fourth and one on the San Diego 34.  It was the type of play that often went against the Chargers this year; but this defense has a spring in its step since Ron Rivera took over as the defensive coordinator and they held tight.  The Chargers offense could have put the dagger in right there; but were only able to drive 13 yards before bringing out Scifres.  He again pinned the Colts back to their nine yard line.  This time however the Colts were able to escape from their endzone and with a quick snap caught Chargers cornerback Antonio Cromartie napping for the 72 yard touchdown; the Colts retook the lead 17-14.

Now was the time for the Chargers time to assert themselves; and indeed they did.  They would drive the length of the field with a well balanced attack of passing and running plays.  Chambers, Sproles, Naanee and Michael Bennett would all come up big; but it would be for naught as Sproles fumbled into the Colts endzone which was recovered by Indianapolis for the touchback.  The Charger defense again held firm against Manning; and the Colts would punt; this time with a 28 yard return by Sproles; once again San Diego was spotted prime field position.  Rivers started moving the ball well; but went for the deep play and would be intercepted in the end zone.  The Chargers were fortunate that the Colts committed a penalty on the runback that prevented the big return. Indianapolis would drive back to their own 44, but stall out there, then punt to put San Diego back at their 29 yard line.

Time was running out with just a few minutes left in the fourth quarter.  Rivers would get to the Colt 44 before what looked like a game changing sack on third down by Mathis.  The Chargers were forced to punt the ball back to Manning with just over two minutes left on the clock.  If the much criticized Charger defense was unable to stop the potent Colts offense the Chargers season would be over.  Mike Scifres came out with another of his reverse spin kicks that went sideways on the Indianapolis one yard line.  Scifres made six punts; every one put the Colts behind their own twenty, but none was bigger than this.  The Chargers gave up six yards to Joseph Addai; but the Colts lack of a running game hurt them here.  On third and two Tim Dobbins rushed in and nailed Peyton Manning scrambling to find a receiver, the Colts were back at the one yard line.  The Colt punter would have to make due with the short end zone to punt from.

The Chargers would get the ball back at the Colt 38 yard line.  Rivers would again eat from the weak middle of the Tampa two defense, passing to his Pro Bowl tight end Antonio Gates.  The Chargers would work their way to the eight before having to settle for the field goal at the eight yard line.  The Colts would make a frantic last drive with less than a minute on the clock; but would come up short.  With these two teams everyone felt the coin toss was crucial; fate smiled on the Chargers as tails came up and they would get the ball.

The Chargers would lose a yard running Sproles up the middle on the first play from their 25 yard line.  Then an incomplete pass put Rivers in a third and 11 play right off the bat.  He was equal to the pressure and hit Sproles for thirteen yards and the huge first down at the Charger 37.  Bennett would rush for six; then the Colts were caught for a defensive holding penalty that gave the Chargers another first down.  Rivers would return to his tight end for eight more yards; the Bolts were so close to victory at the Colt 42.  After an incomplete pass and two yard run by Sproles the Chargers were back to third and eight; but the Colts again got called with a holding penalty giving San Diego the first down in long field goal range.  After another facemask penalty on a Sproles run; the Chargers were well within Kaeding's field goal range.  One last run by Sproles; sprung by Hester would put the final nail in with the 22 yard touchdown run; these cardiac Chargers had completed the playoff victory against a first class coach and organization.

There were many keys to this game; terrific coaching by Norv Turner, great returns and running by Darren Sproles, excellent blocking by Jacob Hester, amazing punts by Scifres and Antono Gates gobbling up passes down the middle.  You also have to credit the defense that came up big whenever they had to and squelched this potent Colts passing attack.  For this team to go minus two on turnovers and still pull out the victory is remarkable.  You also have to give a big hand to Ron Rivera for turning what had been a pourous defensive unit around and coming up with a game plan that had MVP Peyton Manning scrambling.  This is a team many pundits knocked for coming out of the AFC West with an 8-8 record; but they proved they belong.