Inside Linebacker Prospects in the 2009 Draft

Share All sharing options for: Inside Linebacker Prospects in the 2009 Draft

Given the troubles at the inside linebacker position for the Chargers, a quick look at some of the prospects in the draft seems in order.

The top prospect at ILB is Aaron Curry out of Wake Forrest.  Fast, strong, over 100 tackles, 15 for a loss and 2.5 sacks.  Some sites say he might be a bit weak against the pass.  It is not very likely he will fall to 16th; he would be a solid upgrade for the Chargers if he does. 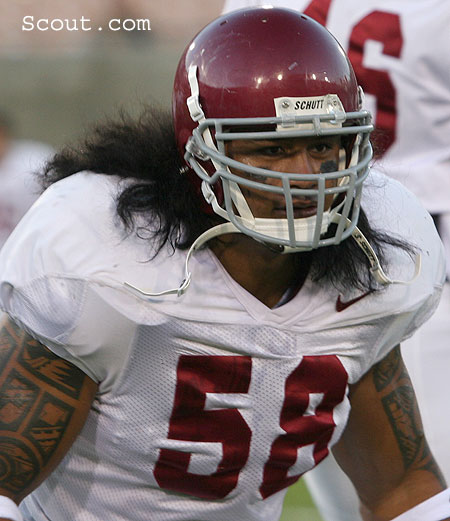 Rey Maualuga out of USC is another first round prospect.  6'3", 254 pounds and fast.  Some were worried about his ability to go sideline to sideline because of the scheme at USC; but he largely eliminated that concern with a great week of practice at the Senior Bowl.  Lots of drafts have the Chargers selecting him; and Maualuga would be a perfect fit but he too might get snagged earlier in the first round.  He made 79 tackles and had two picks in USC's fine linebacking corps.  One thing I wonder about a bit is if some of these USC players look better than they are because of the entire package of talent around them.

James Laurinaitus out of Ohio State is also 6'3" and 243 pounds.  He also can move at speed; some think he uses his speed and athleticism to overcome iffy instincts.  121 tackles, though just 5.5 for a loss along with 4 sacks are good numbers.  He did not participate in the Senior Bowl and that has hurt him in a lot of the mock drafts.  That maybe somewhat overdone as he is still the same player everyone was raving about prior to the game.  There is speculation he may open some eyes with his 40 yard dash time at the combine.  He too looks like a good fit for the first round pick.

Jason Phillips out of TCU goes at 6'1" and just 234.  He finished the year with 13 tackles for a loss, 3.5 sacks and 84 tackles.  Perhaps a bit slower than the top ranked linebackers, he is projected as a fourth round pick.  He was initially a fullback and made the transition to linebacker extremely well.  If the Chargers could pick him off in the third or fourth round, he probably wouldn't be an instant starter but could develop well.

Scott McKillop out of PIttsburgh is another prospect.  He put up over 137 tackles, 17.5 for a loss and four sacks.  He is a bit slow, but those are great numbers.  Sometimes a little slow can work at the ILB position more than others.  He isn't projected to go until the 4th to 5th round; he could be a good target for the likely fourth round compensatory pick the Chargers are likely to get for losing Drayton Florence last year.  He was at the Senior Bowl and by reports was more consistent if less spectacular than Maualuga, he could be a real find when all is said and done.  Eye popping 40 numbers can be overrated.