Inside Linebackers for the San Diego Chargers

Share All sharing options for: Inside Linebackers for the San Diego Chargers

Inside Linebackers in the 3-4 have to fill the gaps between lineman not covered by the line, they may also fall back into coverage and so they need a number of different skills.  One is also usually the 'on-field' general who can audible changes to the defensive scheme or formation depending on what he sees the offense doing.  ILBs can sometimes get away with being slower or older as thinking can make up for a lack of speed.  They have to have a nose for the ball and good instincts about where a play is flowing.  If they can read a run from a pass based on whether the guard is coming forward or rolling back they can get ahead of a play.  Most of all they have to be tough enough to take down a big running back or full back, but also drop into coverage as needed.  They will sometimes get brought on the blitz, but less often than the outside linebackers and they will not usually rack up big numbers of sacks.  The two inside linebackers really need to work as a team, on running plays they try and keep the ball between the two of them. 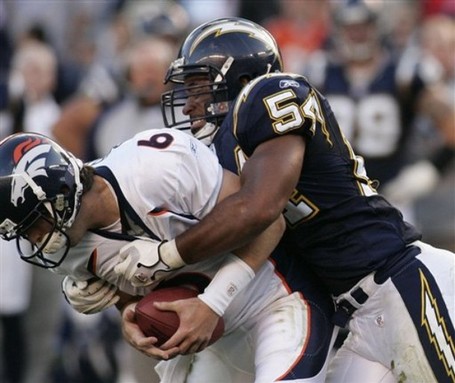 An inside linebacker also has to be good at shedding a block to get to the ball carrier.  They potentially need to move laterally across the field, though usually not as far as a MLB from a 4-3 defense.  Being able not only to tackle, but deliver some punishment is important.  They might need to drop into a zone coverage or cover in man to man; in essence they have to be the Swiss army knife on the field.  Stephen Cooper fills these different roles extremely well.  The Chargers run defense early was weak up the middle when Matt Wilhelm and Derek Smith were the ILBs.  Both had a tendency to get stood up and run over by powerful backs.

Stephen Cooper is 'the man' for the Chargers at ILB, he makes good reads, can cover and provides solid if perhaps not punishing tackling.  He wears the radio gets the plays and has the authority to change the call based on his read of a play.  The run defense instantly improved on his return.  He also picked off four passes near the end of the season that ended up being huge in the Chargers late season charge.  Next season if the defense reasserts itself under Rivera, I can easily see him making a Pro Bowl appearance.  Even with a four game suspension Cooper ended up as the number three tackler on the team with 98, and the teams leader in interceptions with four.

The big question for the Chargers is who plays next to Cooper.  Derek Smith was released after very disappointing play.  Wilhelm essentially lost his starting position with poor tackling and inadequate run defense.  Wilhelm is much better dropping into coverage.  Tim Dobbins stepped up big and looks very good in run defense, unfortunately his pass defense is wanting.  Dobbins can really deliver a hit too; he is one of the few fearsome tacklers on the Chargers.  Brandon Siler comes in for short yardage running situations and has been fantastic in that role.  He has not played enough outside of that to evaluate as a potential starter.  The last one on the depth chart is Anthony Waters who is simply a walking question mark.  The Chargers were very high on him coming into training camp, but a knee injury and tepid play resulted in him only being active in seven games last season.  If the Chargers find the perfect fit at ILB in the draft I can easily see them making that move.