3-4 Outside Linebacker Prospects from the 2009 Draft

Share All sharing options for: 3-4 Outside Linebacker Prospects from the 2009 Draft

Aaron Maybin, 6'4", 240 pounds
Technically a defensive end, this guy has risk written all over him.  20 years old and not as big as you like to see; all he did was put up 20 tackles for losses and 12 sacks.  If AJ likes the way he plays, I can totally picture him grabbing this guy off and letting him develop behind Merriman.  He often commanded double teams but was so fast they still couldn't contain him.  Put some weight on him and he could be the next Merriman; I don't see that in any of the other prospects.  The flip side is he has had exactly one amazing season; he could also bust. 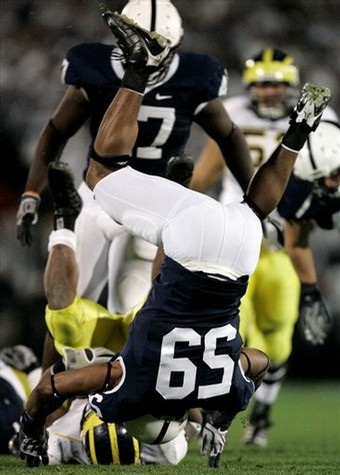 Clint Sintim, 6'3", 254 pounds, projected round 1-2
Plays OLB in a 3-4 and picked up 12.5 tackles for losses along with 11 sacks.  He is projected to be very quick, but might be a stretch with the 16th pick.  This guy has the reputation of being the complete package at LB, good at run defense, the pass rush and coverage.  If AJ could trade down, pick up another first day pick Sintim could provide backup for Merriman and be groomed as an eventual replacement either for Merriman or Phillips.  Clearly last season the backups were not quite up to the task.  Ideal for 3-4 teams, this guy could end up as a Patriot if the Chargers go a different way.  Reports say he performed well in Senior Bowl practices and improved his draft status. 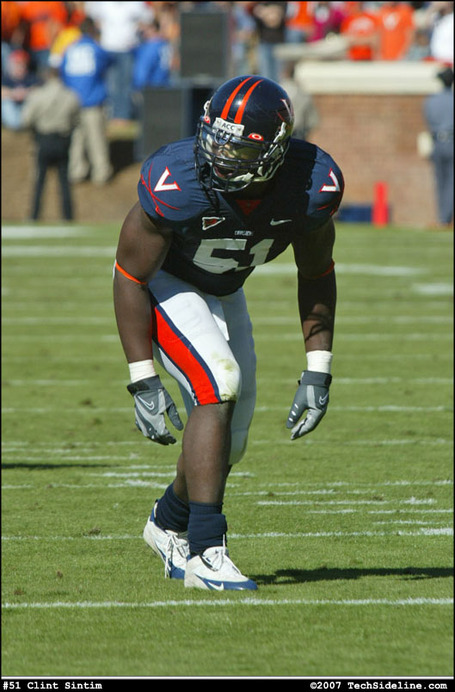 Brian Cushing, 6'3", 243 pounds, projected round 1-2
Injured in 2007, he had a good 2008 campaign for USC.  He didn't put up the type of sack numbers you might hope.  Reportedly extremely athletic and powerful; he might have a huge upside for a team that can be patient in bringing him along.  Has the reputation of a blue collar player who plays hard the entire game.  He also made a good impression at the Senior Bowl practices.  More of a risk, but with Merriman and Phillips to develop behind he might be worth it.

Clay Mathews, 6'3", 246 pounds, projected round 2-3
With two third round choices he might be a good pickup.  10.5 tackles for loss, three sacks and 6 pass defenses he put up reasonable numbers, but pales next to USCs other great LB prospects.  He was reportedly more fluid in space than expected at the Senior Bowl, but I'm not sure he worth a third round choice for what might amount to just another backup/role player.

Marcus Freeman 6'2", 242 Pounds, projected 3-4th round
Another player that improved his standing in the Senior Bowl.  He comes out of Ohio State where he picked up nine tackles for loss and 3.5 sacks.  The sack total is a bit low and he has also struggled with injury during the season.  Playing next to Laurinaitis he might be somewhat overlooked; he made eight tackles in the Senior Bowl.  I can see this as being a reasonable chance to take.  One thing I like about this is that he is starting work on his masters degree over the summer; that shows a grounding and work ethic you won't always find.

Tyrone McKenzie, 6'2", 244 pounds, projected round 2-3
This guy has been a tackle machine with 99 last season, but 120+ both seasons prior to that.  He made 11 tackles for loss but just one sack; he seems unlikely to break through to a Pro-Bowl caliber player, but might turn into a good backup.


Michael Johnson, 6'7", 257 pounds out of Georgia tech
He is a defensive end, but might convert well.  6'7" is a big frame, and 17.5 tackles for loss with 9 sacks and seven passes broken up he put up big numbers too.  He had a slow start, but came on strong in the second half of the season.  Reportedly very athletic and fast; that makes him a prime candidate for conversion.  Could he be too tall with a high center of gravity?  He is considered a top 25 pick, so it might be a slight reach.  That said Kiper actually had the Redskins taking him ahead of the Chargers pick so who knows?