Share All sharing options for: San Diego Chargers Outside Linebackers

The Outside linebacker in the 3-4 is a vital one, as Chargers fans found out in the aftermath of Shawne Merriman getting injured. With just three lineman to rush the passer, generally the 3-4 will blitz one or both outside linebackers to try and collapse the pocket. It can be harder to pick up because the defense can send either one of the outside linebackers, or even a safety or cornerback in order to bring pressure. In prevent type situations they can just drop the linebackers into coverage instead. If the pocket is not collapsed then the quarterback will have too much time to find an open receiver and the secondary ends up getting picked apart. 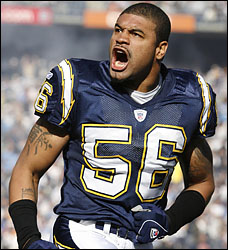 The linebackers are usually named according to whether they line up on the strong side or weak side. The strong side is simply the side of the line that the tight end lines up on. To me it had seemed a minor distinction, but Shaun Phillips actually struggled quite a bit as they moved him from his weak side to Merriman's strong side. It also showed how the absence of a playmaker affects the defense as Merriman's absence made it easier for opponents to focus on Phillips; Jyles Tucker, Waters and Antwan Applewhite were passable but never got the type of heat that Merriman brought. They combined for six sacks where Merriman would put up two to three times that many in a season.

Merriman's return should greatly improve the defense next season if he stays healthy; but it did bring out that depth for the OLBs is not what was hoped, the current group is little more than average. Both Phillips and Merriman are outstanding, but those positions are so crucial to the overall success of the defense that the Chargers must pick up better replacements, either through the draft or free agency. The other aspect of Merriman being out was the opponents ability to focus on Shaun Phillips. The combination of switching to strong side coupled with Merrimans absence led to a slight drop off in sacks but an increase in tackles; early in the season it looked like Phillips was falling off dramatically but he finished the year strong when moved back to the weak side.

One of the backups for Phillips was Marques Harris, who is becoming a free agent this year. Harris performed fairly well with 28 tackles and 2.5 sacks, but he is not likely to be back next year. Jyles Tucker was the big hope to replace Merriman, but he had a number of nagging injuries and simply didn't live up to the overall hype when he was brought in. He did end up with 5.5 sacks and 37 tackles and seems like a good backup. Applewhite looked pretty good filling in at the end of the season, but does look a bit slow when he plays in space. Shaun Phillips was a fourth round pick and James Harrison, the great OLB from the Pittsburgh Steelers was undrafted, so gems can be found out there outside the first round. The Chargers might use one of their picks to try and find the next Merriman, they could also try to convert a defensive end as they did Jyles Tucker. Either way, the key to this defensive unit is going to be how those OLB positions perform.