Defensive Ends in a 3-4 defense are the Rodney Dangerfields of the NFL, 'No respect I tell ya'.  Because there are only three on the line, the NT needs to demand a double team.  The ends in the 3-4 really don't accumulate the glamorous stats of the outside linebackers.  The ends generally run much heavier than the DE's in a 4-3 lineup, usually at 290 pounds and up to take on those big tackles; they are really more of a defensive Tackle.  The primary goal of the DEs in the 3-4 is to cover the run gaps and hopefully collapse the pocket on pass plays.  Collapsing the pocket becomes much tougher with three lineman, usually the 3-4 really brings pressure by bringing one or more of the outside linebackers from the edge on a blitz, which is also why they rack up the sacks. 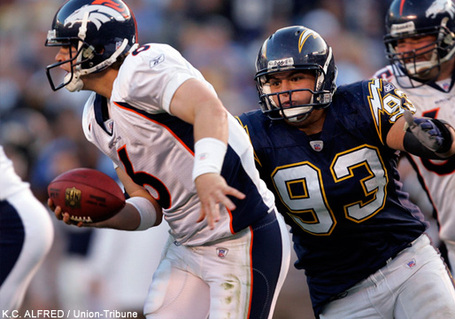 3-4's come in two flavors, one gap, meaning that each lineman is responsible for defending just one gap between offensive lineman, and two gap, obviously they are responsible for two gaps in run defense.  San Diego runs a one gap 3-4.  Generally 3-4's do well against the run and can pretty easily turn to a prevent type defense by just dropping the linebackers into coverage instead of having them rush the passer.  It brings pressure on the quarterback by rushing different linebackers to keep the quarterback and offensive line off stride, sometimes they will even blitz corners or safeties and have the linebackers move over to cover that area (this is Lebeau's zone blitz scheme).

Igor Olshansky is the Chargers right defensive end, he weighs in at 309 pounds and is extremely strong.  He came to football later than most, having started in his junior year in high school.  He lived in the Ukraine until he was seven.  It was hoped he would develop into a premier end however that didn't happen, though he put up good numbers in 2007 with 69 tackles and 3.5 sacks.  He was hampered in some of his earlier years with injuries.  Picked up as part of that amazing 2004 draft; this is his final contract year.  It was hoped he would be going all out to put up numbers this year, but perhaps with injuries in mind he was very quiet this year.  He made 28 tackles with 2 sacks and was never a force in any game.  Chargers management has made it pretty clear that they are not interested in keeping him at that level of productivity.

On the left end is Luis Castillo who was a first round choice in 2005.  He was considered a bit of a risk since he had tested positive for steroids, reportedly to help a slow healing injury.  The Chargers took a chance and when he was in the line up those first few years he was great.  He did have trouble staying healthy, but made the Pro Bowl in 2006.  His sacks have declined from a high of seven in 2006 to 2.5 in 2007 to just 1.5 this year.  This year he has battled back problems, but  did appear to be bringing more pressure in the last few games.  It's hard to say if Merriman's absence is also affecting Castillo's numbers as Merriman used to often draw a double team.  He did make 40 tackles, but there is no doubt that his performance declined this season.  Castillo was signed to a five year 43 million dollar contract with 17 of it as a signing bonus, some have wondered if he hasn't gotten a bit too comfortable with the fat contract.  I was skeptical of him in the beginning of the year; but he did appear to get better as the season wound down.

The Chargers are clearly staying with Castillo and letting Olshansky go.  They do have several interesting backups in Jacques Cesaire and Ryon Bingham.  Bingham has also been brought in as backup for Jamal Williams on occasion.  Cesaire has shown flashes of excellence ending the season with 22 tackles and two sacks.  Both sacks came in one great game against Pittsburgh.  I'm not sure he has what it takes to be a full time starter, but it might be interesting if the Chargers gave him a shot.  Ryon Bingham never impresses me much, but he did make 25 tackles and 1.5 sacks.  The defense always seems weaker against the run when he is in, I don't see him as more than a backup right now.  The Chargers could go for a bona fide end starter with their first rounder, or go for a backup in the draft.  They might also look at free agency for a mid-level guy, they just don't go for the big free agent splashes.