Safety Prospects for the 2009 Draft

Share All sharing options for: Safety Prospects for the 2009 Draft

This draft looks to be a bit thin on safety prospects.  The best hopeful was Taylor Mays out of USC, but he has decided to stay for his final year of college and will be coming out next year.  Safeties are often taken outside the first round; it doesn't look to me like there will be one that is worthy of the Chargers first round pick (16th overall).  Another interesting option for AJ would be trading down; perhaps for a late first round pick and another first day pick.  I have mostly looked at the prospects projecting at strong safety, weighing in at 210 or more.

William Moore out of Missouri is probably the only safety that might be worth grabbing at 16.  He weighs in at 227 but reportedly is quite fast; that is a nice combination.  In 2007 he had seven picks; but just ended up with one in 2008.  This season he did have 83 tackles, 5.5 for a loss with seven passes defended.  What he does have is the size to give a receiver crossing the middle a serious case of short arms. 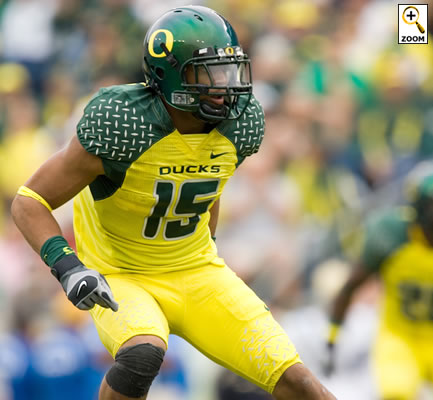 Patrick Chung of the Oregon Ducks is another first day prospect at safety.  He has been impressive for the Ducks, coming in at 210 pounds.  For the Ducks he was a leader on the defense and has the reputation of playing with a passion; which is just what you are looking for in a safety.  He does well in the weight room and plays like a linebacker against the run.  The problem with Chung is that he will likely fall to the second round where the Chargers don't have a pick; but he is probably a stretch with the number one pick.  It seems very unlikely he will fall to the third round.

One Safety that put up great numbers this year was Michael Hamlin.  Coming in at 205 pounds he ended up with 91 tackles, seven PDs and six picks.  At 6'2" he might be good at covering tight ends and with that much height he could conceivably put some weight on.  He was the MVP for the Clemson defense this year, some have him going lower, but to me he looks like he could go earlier.

Sean Smith has been a CB for Utah, but at 6'3" and 215 pounds probably will be converted to safety in the NFL.  He has around six picks the last two years.  He looks to be an ideal candidate for what the Chargers are looking for and could fall to the third round if the Bolts are lucky.

Nick Harris is interesting and probably will be around in the third round.  He comes in at 6'3" and 225 pounds; the down side on him is that he is supposedly just a bit slow.  Supposedly a terror against the run, you have to wonder how he will stack up against the speed in the NFL.

If AJ is interested in yet another project, Kevin Ellison out of USC might go in the late rounds.  He missed most of the season with a knee injury, but still had seven PD's and just under fifty tackles.  This is the second year of knee injuries though, so that has to be a concern.  He is an interesting prospect that might be worth a look if he falls deep into the second day.