The Chargers have gone through a lot of turmoil at the safety position. In 2006 Marlon McCree and Terrence Kiel were the starters; Bhawoh Jue and Clinton Hart were backups. Safeties come in two flavors, strong and free. Generally the strong safety is the one that is going to be hammering receivers that make crossing routes across the middle. The Free safety is going to provide coverage and over the top help; though in many schemes the two can perform essentially the same function. Free Safeties are usually a little quicker; and the strong safeties bigger but slower. Safeties are usually the last line of defense; if a play gets behind them it is typically seven points. 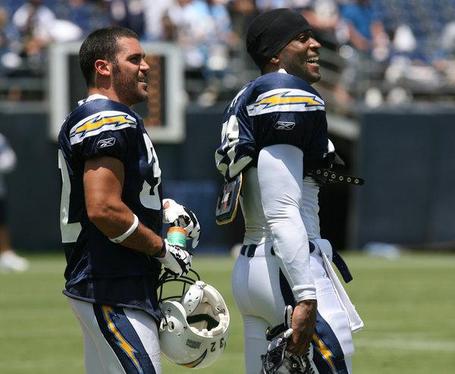 Unsafe at any speed

In 2006 Kiel was arrested early in the season for sending codeine based cough medicine through FedEx to Texas. After he pled out, the Chargers released him, leaving McCree, Jue, and Hart. Jue went to injured reserve and McCree and Hart were it. McCree was a huge hitter, but he was slow and often took bad angles on plays; Adrian Peterson just ate him alive. Hart made mistakes, but showed promise. In the 2007 draft AJ Smith traded up, to the tune of a second rouder to nab Eric Weddle for the future.

In the 2007 season Hart & McCree were the starters. With the departure of Wade Phillips and the arrival of Ted Cottrell the defense struggled a bit in the early part of the season. Phillips was much more aggressive with his play calling; Cottrell was more a 'bend don't break' and wait for your opponent to make a mistake type coordinator (extra credit to anyone who can diagram that sentence). The second half of that season the new philosophy did pay off with a number of turnovers and McCree and Hart ended up with 8 interceptions between them. As the season wore on; Weddle saw more and more time on the field and seemed to be improving. He improved enough that the Chargers released McCree in the off season.

Releasing McCree was not a bad move; he was just too slow. Denver picked him up and he performed poorly giving up big plays and getting injured. Things were not happy for the Chargers either as in the first game of the season Carolina's rookie tight end, who is mostly the responsibility of the Safeties, got loose for a huge game including the game winning catch in the final play. This was a pattern that would recur throughout the season and is evident in the Football Outsiders statistics for the defense, only three teams were worse in covering tight ends. It was often difficult to tell which safety had made the mistake; but more often than not it was Clinton Hart by the end of the year. Hart broke his hand early in the season and that may have been a factor early in the season. There is no doubt that having Merriman out left quarterbacks more time to find their checkdown receivers and that Merriman essentially had masked sub-par safety play.

With the upcoming offseason it is hard to imagine Clinton Hart keeping his starting job. He may serve as a backup but given the numbers there is no way he keeps that position. Weddle played poorly early in the season, but by the half way point was much more in control and played far better under the playcalling of Rivera; he will remain the starter. The Chargers do have Paul Oliver and Steve Gregory on the roster that could conceivably move up. Oliver saw some time and looked reasonable in a back up role; Gregory seemed to improve things when filling in for Hart but looks very slow. Neither is going to be a great solution, that does leave a hole that needs filling, either through the draft or in free agency.