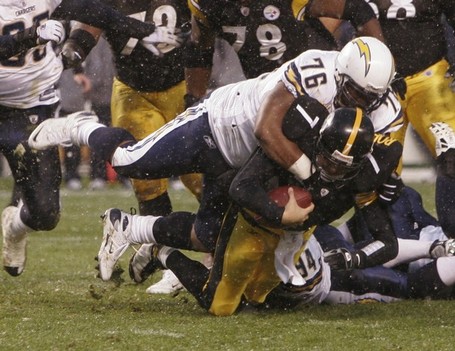 The Chargers run a one gap 3-4 defense.  This means that there are three on the defensive line, the Nose Tackle and two defensive ends and each of them is responsible for just one gap (between two offensive linemen).  In this system the hardest player to find is the nose tackle.  The nose tackle needs to be a monster capable of demanding the double team by the offensive line.  He has to be able to hold his ground, or even better, penetrate across the line of scrimmage to jam up runs coming up the middle.  Generally these are 'wide bodies' that run 325+ pounds, not just heavy but massively strong to push across the line.

The Chargers have a prototype in Jamal Williams listed at 348.  Last year the Chargers had Brandon McKinney backing him up and perhaps grooming as his replacement, but this year McKinney was dropped.  Something must have been at issue there, whether injury or off field.  Williams has been amazing at nose tackle, but with eleven seasons under his belt his knees are finally grinding down.  Currently he gets an extra day off per week and sees little playing time in the preseason.  There was a definite drop off the first three to four games of the season as he played his way into shape.  Later in the year he returned to form, but he didn't seem to be getting his customary push against the Steelers.  Making the jump to the NFL from college at NT isn't easy; it would be best to ease his replacement in for at least a year.  That means a nose tackle should be a priority in this years draft; perhaps even the first round choice if the right player is available.

Currently the Chargers list Ryon Bingham and Ian Scott as depth at NT.  Bingham weighs in at just over three hundred pounds and is a definite drop off in performance.  He played more early, not coincidentally when the Chargers were giving up more yards on the ground as Jamal rounded into shape.  Stephen Coopers absence also played a role in the soft run defense early on.  I think concern over Jamal triggered us to pick up Ian Scott, but with Jamal healthy he never made the actives.  Ian Scott also weighs in at just over 300 pounds and seems more suited to a 4-3 tackle to me, he comes from the Bears who do go with a 4-3 defense.  Next we will look at some of the draft prospects at NT and see which are most promising and might be available.