Hell of a Season!

Share All sharing options for: Hell of a Season! 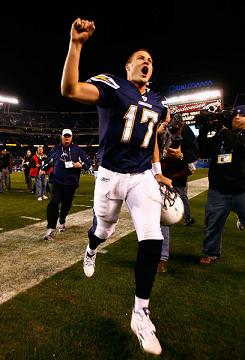 This is not  the way we wanted our season to end, but these last six weeks leading up to today have been the most exciting six weeks of football I can recall.  We rode the highest of highs after twelve weeks of truly heart wrenching football.

Six weeks ago The Charge trounced the Raiders.  Then Rivers lead the Chargers on one of the greatest comebacks in the final minutes in Kansas City.  Going into Tampa, the Bolts were underdogs matched up against a playoff team.  It didn’t matter, the Chargers put together a complete game and it wasn’t even close.  All the time our team needing a colossal collapse of historical magnitude by the Broncos.   The Bolts got it and capitalized on Denver’s fall in a big time way.

After destroying Denver I was satisfied.  If the season ended after that magical night at the Q it wouldn’t have mattered.  The Chargers lost so many close games.  Every game early this year they were in position to win, but like today, nothing would go their way.   Redemption was ours, the Chargers were Champions.

The Colts game here last week was the cherry on top.  An epic playoff game for the ages.  Our rivalry with Indy continues, as we have their number.  It was the greatest game I’d ever seen in person.  One I’ll remember forever.

So listen here Charger Fans!  This was a great season!  The Chargers showed a lot of heart, including today.   I’m proud to be a Charger fan and you should too!