This team is going to work on your last nerve, every game has been exciting.  They turned this one around in a span of about five minutes in the fourth quarter. 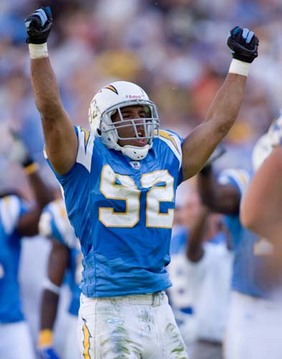 Quarterback - C-
Rivers was a bit off yesterday; 14/25 for 180 yards.  Not only did he have the two interceptions, but he also was throwing the ball just beyond the reach of his receivers.  This grade would likely be lower if the Chargers had lost, but in the end he did get the TD to Gates and pull off the fourth quarter comeback.

Offensive Line - C-
After giving up only two sacks in their first three games, the Oakland line got to Rivers 4 times; but also pressured and hit him regularly.  The run blocking was also mostly lacking, LT was well contained, but they pop him free twice in the fourth quarter for TD runs.

Running Backs - B
It wasn't pretty through three quarters, but LT broke in for TD's twice in the fourth quarter.  His final run gave him 106 yards and 2 TDs, leaving him with four on the season; and all that with having the bad toe.  Sproles didn't do as well from scrimmage, gaining just 12 yards on 6 carries, but was robbed of a nice run when the two minute warning expired.  And while it should be credited to special teams, his runback after the Raiders tied the score at 18 was crucial to the game.  Tolbert also chipped in with a nice 11 yard run.

Wide Receivers - C-
You can blame some of this on Rivers and the offensive line, but the receivers just did not seem to be getting separation from Oaklands DB's.  The wideouts combined netted less than 100 yards.

Tight End - B
Antonio Gates caught for 58 yards and the TD, he is looking more and more like his old self.

Defensive line - A
Jamal looked like he did back in 2006 here; 3 tackles, 3 assists and half a sack.  You could just sense that there was nothing up the middle when he was in there; he dominated that portion of the line.  This was an Oakland unit that came in averaging 5 yards per carry, the Chargers held them to just over 3, for a miserly 72 yards.  Luis Castillo was also on fire with 3 tackles, 2 assists and 1.5 sacks; including the devastating fourth down play near the end of the game.

Linebackers - A-
The linebackers also were applying pressure with Phillips, Harris and Tucker all chipping in with sacks.  T. Dobbins also picked up a timely interception on a screen pass that helped set up a score.  M. Harris who stepped up for Jyles Tucker when he went down with a hamstring injury pulled off the sack, forced fumble and recovery that really turned this game around for the Chargers.  The Chargers overall forced five, three and outs.

Safeties - C
This grade mostly reflects the blown Tight End coverage that led to the Raiders only TD of the day.  The TE blew past Dobbins into the clear, it seems like this has to get hung on Weddle who also had a Russell pass whiz right through his hands.  The Chargers have to find a way to cover tight ends consistently.  On the up side you have to credit Clinton Hart for keeping stride for stride with the Oakland WR to break up what would have been a sixty yard strike.

Cornerbacks - B
Quentin Jammer had his typical great day, making tackles and providing terrific coverage.  He doesn't get the picks they want to see for the Pro Bowl, but this guy is a Pro Bowl corner.  On the other side Cromartie mostly had a quiet day, but was lit up for two more penalties; fortunately neither turned out to be disastrous.

These were a mixed bag; Scifres was great punting, but Kaeding had two big misses that would have loomed large if this had been a loss.  Kickoff coverage again allowed a big return, but it was nice to see Hester contribute two big tackles in coverage.  As mentioned earlier, Sproles had an absolutely backbreaking run late in the fourth quarter to setup the go ahead field goal.

Cottrell isn't the most popular guy, but I have to give credit where credit is due; this was a great effort by the defense, they really won this game.  The defense smothered the run and even with two picks and one short field due to a run back allowed only 16 points; a grand total of 3 in the second half.  Cottrell also continued blitzing on the final series, which led to that final sack by Castillo.  This win coupled with Denver's divisional loss puts the Chargers back in control of their own fate, if they win out from here they would beat out Denver.