One problem this season has been the offensive line.  While they have done reasonably well with pass blocking; the run blocking that paved the way for LT to set a record for TDs in 2006 has been lacking.  Last weeks victory against the Raiders was a much better performance; but even there LT was averaging just under 4 yards per carry.  Currently Football Outsiders ranks the Chargers unit as 26th in the league with 3.88 yards per carry; the Giants are number one with 5.2; Cincinnati ranks dead last with 2.84.  They rank in the middle in terms of getting stuffed and runs of 10+ yards.  Their power run game is surprisingly good with 71% success (short yardage situations); the best is Washington with 78% success.  In terms of pass blocking the Bolts allow just under 6% sacks on throwing plays, good for 15th in the league.  Here is a quick look at the current starters (Unless otherwise noted all stats are coming from Football Outsiders). 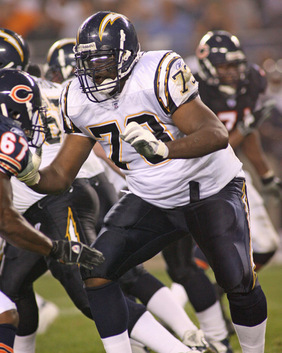 Left Tackle Marcus McNeill
McNeill had a Pro Bowl year as a rookie in 2006; he was really dominant. Something of a surprise in the second round, he was taken so late due to a fractured hand and a spinal issue that made teams hesitant to draft him too high.  He also had a reputation of not hitting the weight room.  There was no question he looked like a steal in 2006.  McNeill gave up more sacks and was less dominant despite having both hands out of a cast.  In preseason this year he looked set to have a comeback but a freak accident where he slipped and took a knee to the top of his head left him with a stinger that took him out of the first four games.  He has subsequently been uneven; sometimes looking like his rookie year; but running left behind him and Dielman has not had nearly the same punch.

Runs headed off tackle are averaging 3.42 yards; good for just 26th in the league.  Even though the first four games McNeill was out; that number really surprised me as the left was always where LT ripped big gainers the last few years.  The Chargers run 15% of their plays towards the end; 11% towards the tackle.  Around the left end runs are averaging a paltry 2.3 yards; I haven't been looking but I wonder if teams are selling out to cover runs to that side.  So runs around left end and off left tackle rank 28th and 26th in the league on what used to be the Chargers best side.

Left Guard Kris Dielman
Kris Dielman is a great story; an undrafted free agent as a defensive lineman; the Chargers converted him into an excellent guard for the offensive line.  In 2007 he had the opportunity to get a huge payday and go to Seattle; he decided that his home was San Diego and took 9 million less to play here.  The Chargers run 50% of their plays in what is classified the middle; that covers Dielman, Hardwick at center and Goff at right guard.  These plays are averaging 4 yards per carry ranking them in the middle of the NFL.  When Dielman was out against the Falcons the Charger line really got run over by the Falcons; that does show him as a vital cog still.

Center Nick Hardwick
Nick Hardwick was part of that amazing 2004 draft that really built the Chargers.  He has gone to the Pro Bowl and is really the heart of the Chargers line.  In 2007 he played on a severely strained ankle that required surgery in the off season.  He was out the first four games and has not looked the same this season either.  There is a serious question about whether Charger doctors let him play too long on the bad foot last year; he is reportedly still not 100%.

Right Guard Mike Goff
He has been steady if unspectacular at this position; but with his contract expiring and results less than average this is likely Goff's last season as a Charger.  Scott Mruczkowski is his backup and is not likely the long term future for this position.  He looked terrible against Atlanta, he might as well have had two flashlights and been directing folks at Rivers.  I'm not sure if it will get addressed in the draft or by a free agent but I expect the Chargers to make a move here.

Right tackle Jeromy Clary
This was the Tackle position that the Bolts were expected to address in last years draft; unfortunately all the stud tackles went quickly and AJ picked up Cason at cornerback instead.  Clary, like Goff has been steady at this position.  Runs go to the right end or right tackle just slightly less often than to the left.  The results are much better however averaging 4.5 and 4.3 yards per carry respectively; that ranks in the top third.  I wonder why we don't just run exclusively right until teams prove they can stop it.  As I think back, most of the big runs I recall have gone off right or up the middle.  As for the future you can almost build an offense around a stud tackle; despite his problems the last two years McNeill is clearly the future at left tackle, but if there is a stud on the board when we draft I expect AJ will be unable to resist taking him.

Fullback
Not technically part of the line, but after watching a bit of the Raven's game I thought I had to mention something.  I know Norv likes soft hands out of the backfield, but that just doesn't take the place of a fullback that can blast a defender.  Both Tolbert and Hester have shown minimal success at this; the Chargers must have a LoNeal type Fullback for the resurgence of the running game.  Maybe Tolbert can improve in the offseason, and fullbacks usually don't go high in the draft; the Chargers have to get a mastodon at fullback that will stampede the way for LT again.