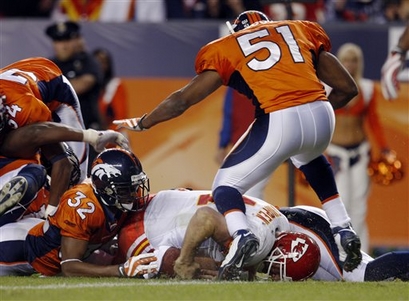 Tyler Thigpen was a half yard short of giving the Charger faithful a little extra hope.  Now the Bolts are teetering on that mathematical elimination edge.  If the Chargers don’t keep an eye on Thigpen next week the Bolts could very well plummet off the edge, ending our 2008 season.

I don’t know much about K.C.’s quarterback.  I don’t know his stats, his rating, his collegiate background.  I don’t know anything about this guy except for what I’ve seen on two drives.  From what I saw this afternoon one thing is clear, this dude is all heart.  One thing Thigpen is not short on is guts.  The Chiefs aren’t playing for anything.  He put together a hell of a drive, scrambling several times for big gains.  But in the end it wasn’t enough.

Last month I witnessed the same driving force down at the Q.  The Chargers were up by 7 and Thigpen marched down the field to score a touchdown to bring the Chiefs within one point.  Failing on a two point conversion gave the Bolts the win.

I’m telling you this guy plays best when his back is against the wall.  The Chargers need to do what they did against the Raiders and put up some serious points early.  The Chargers have to keep a decent size lead throughout the game to keep what little hope there is still alive.