This season has been like waiting for Godot, well last night Godot finally showed up.  It's just too bad it's so late.  I know it was the Raiders and they were mailing it in; but the defense just is better under Rivera.  The other thing that showed is what an enormous difference between the Bolts and the Raiders, despite almost identical records.  The Raiders are just done for this year.  The play of fourth and two where McFadden wouldn't even put his hands up to catch a slightly overthrown ball is where that team is at.  The Chargers are still playing hard despite being in almost the same spot in the rankings.

The Bolts haven't been blown out this year; they may lose but they don't fold.  The other thing watching the Raiders makes you appreciate about Norv is the development of Rivers.  You look at Russell and he has an absolute gun, but without a QB coach he is just a Plaxident waiting to happen (what's the royalty on that Axion?).  I'll carp some about the penalties again; 9 for 51 yards.  Some of those were just being overly aggressive and being too quick over the line; but the false starts this late in the season have to stop, against a better team those can be huge.  I was not crazy about the challenge with two minutes left leading 34-7; I like hard play but lets not go the Bilichick bitch slap route when teams are beaten.  Ok, on to the grades.

Quarterback - A
Folks could quibble; Rivers didn't rack up huge yards and had three TD's through the air; but he owned this game.  Two deep plays, lumbering for two first downs and no turnovers; he put this game out of reach.  After the Raven's game it would have been so easy for him to lay his performance on his offensive line; but he never did that and he praised them extensively after the game yesterday.

Offensive line - A
What a comeback, these guys were awful against Atlanta but showed up for run blocking and pass blocking against the Raiders.  You look at what happened to Oakland and it brings back that everything starts with the offensive line.  Earlier I was thinking the Bolts should go defensive nose tackle with the first rounder; now I think it has to be an offensive tackle.  Yeah, I remember they made the penalties, but they came up with extra credit last night; credit Dielman for 15 yards in getting the Raiders to blow their cool.

Wide Receivers - A-
Mostly sharp, Vincent Jackson blew by coverage and caught a huge gainer for the TD; he also had the big gainer on the opening drive despite having a Raider draped all over him.  Chambers missed a tough catch; he just hasn't been on since that ankle injury. 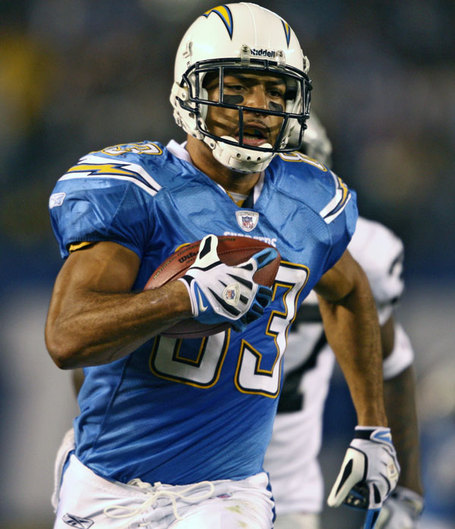 Running Backs - A-
These guys went for 158 yards on the ground and LT had a nice rumble called back on a hold.  LT ran it in from the red zone; Sproles caught the ball; ran the ball and had one punt return called back for another hold.

Tight Ends - B
Gates pulled double coverage opening up the Wide receivers and Manumaleuna had some great blocks in the running game.

Defensive line - A
This is a good rushing team that got held to just 54 yards.  Jamal is just a plain old monster in the middle; I don't know what they are feeding him but I wish they would give it to everyone.  You can almost see the opposing centers cringing when he lines up.

Linebackers - A
All season long S. Phillips and J. Tucker have been trying to fill Merriman's shows and they kept flying off because lets face it; those are some big damn shoes.  Last night they just tore it up; I know it helps to be going against Kwame Harris but these guys picked up three sacks and had huge pressure that resulted in four turnovers.  Phillips sure looked comfortable back on his weak side spot.  Cooper looked terrific too; with two picks, 7 tackles and two PDs.  Antwan Applewhite saw more time; I thought he looked good out there but not much stat wise.

Corners - B
Jammer and Cromartie had two PDs; they sure look a lot better when the QB doesn't have time.  Cromartie had that ridiculous run on the pitched pick that I was certain was going to end in a fumble but was just plain fun to watch.

Safeties - B
Gregory looked good out there filling in for Hart.  He made some big hits that held folks shy of the first down and ended up as the teams leading tackler.  Weddle showed up too; he had a rough start but really seems to be settling in directing the secondary.