Is Norv Turner the Problem?

Share All sharing options for: Is Norv Turner the Problem?

You don't need to be listening closely to hear Charger fans clamoring for Norv Turner to be fired. 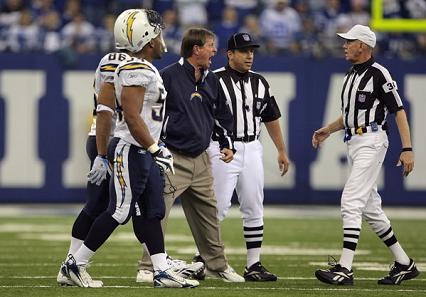 The general sense is that he inherited an enormously talented team and turned it into a pile of mush without identity. So with the season basically over and the team standing at 4-8; you have to wonder 'Well, how did I get here?'. Lets look at some of the basics first, the overall team stats:

Passing yardage at 236 per game, 9th in the league is a good number. Norv certainly has a lot to do with that; also with the development of Rivers as a quarterback. Some of those yards are out of necessity though. This is a team that has played from behind all year with the exception of the games against the Jets and Patriots. Here is the line on Rivers for the year:

Even with the past few games Rivers has clearly come a long ways as a quarterback. While certainly it's possible that would have happened anyway, it seems fair to say that this offense did very well even with Gates and LT injured in the beginning of the year. Norv's record as head coach certainly leaves you wondering too, but in checking out how the teams (Washington & Oakland) did the few years after Norv was fired, it turns out they fared even worse for several years (in the case of the Raiders they are still worse).

Since taking over the Chargers, the Bolts have certainly degraded. It is hard to hang all this on Norv as AJ installed Ted Cottrell as the defensive coordinator. He did allow Turner to fire Cottrell just three weeks back and the defense has looked decidedly better; unfortunately the offense is now sputtering. Certainly it was completely dominated by the Falcons last week in a game the Chargers had to win.

One area where I think there are legitimate questions about his coaching are penalties. This is a team in a lot of close games, and lets face it there isn't the margin for stupid penalties. In the last four games the Chargers have amassed 9-84 yards vs. Atlanta; 2 for 5 yards in Pittsburgh; 5 for 37 yards against Indy and 5 for 37 yards against the Chiefs. That's a grand total of 32 penalties for 163 yards over the last four games. They are giving up an average of 40 yards per game to opponents; every game was decided by less than a touchdown and the Chargers are 1-3 in those games. That shouldn't be tolerated this late in the season and I don't see anybody calling out the guys that are committing the penalties.

Looking at the overall picture I still think Norv deserves one more bite at the apple. He brought us within a game of the Super Bowl in 2007 and had the Chargers playing well; even with multiple injuries. Next season Merriman will be back; and lets face it; he makes the players around him better just by taking up a double team and forcing teams to scheme against him. We should also get a pretty first round draft choice that should be used to bolster our beleagured offensive line. If Norv can't win next season; then he should be jettisoned. I recognize that puts me in the minority of Charger fans and even football fans who think Norv is a catastrophic failure.