Share All sharing options for: Chargers Approach the Playoffs

As the Chargers begin the playoffs analysts and pundits are already predicting the quick one and done for the 8-8 Bolts. I thought it would be well to take a look at what has changed since many were predicting a deep run, perhaps even to the big game. Hopes were high coming into that first game of the season against the Panthers, perhaps foolishly high. Merriman had just pledged to play the season and the pieces looked set for a simple divisional championship. That first game had some key pieces either missing or not completely healed however. 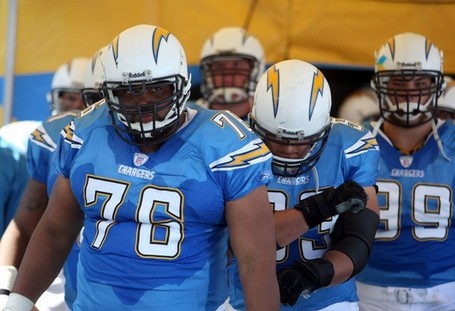 Antonio Gates was playing, but clearly not at full strength. Nick Hardwick was not at center, Jeremy Newberry was filling in quite well however. Our Pro Bowl left tackle Marcus McNeil was out with a severe stinger that would keep him out those first four week. Merriman would play at outside linebacker, but was not playing as much nor as well; though he is always a force. Rivers had looked fine in preseason, but how would he take that first real hit? LT had not played in preseason, but seemed to be bursting to go after the offseason critics had been gnawing at that last New England game. Stephen Cooper was out with the four game suspension; but the feeling was that Wilhelm and Derek Smith would be up to the task, some even asked if he might not get played out of a job.

That first game dispelled some worries, but increased others. The defense fell apart late allowing the last second score for the victory. The Panthers had beaten the Chargers even without Smith who was on suspension. Wilhelm and Smith were woefully overmatched at the inside linebacker positions. The offensive line was sturdy enough with the backups and best of all not only were Philip Rivers knees solid, but he was hitting deep patterns better than ever due to rigorous off season weight training. Vincent Jackson and Chambers looked to be picking up right where they left off. The secondary was still struggling to cover Tight Ends however. At the end of that game you had to be worried about the inside linebackers Wilhelm & Smith and Merriman decided he wasn't going to be able to play on.

The Chargers would get shocked in another last second loss in Denver, once again the defense fell down late allowing a last minute touchdown with the two point conversion. The coverage of the tight end was again lacking, LT was clearly not quite right and wouldn't be until after the bye. More worrying was Antonio Cromartie's complete meltdown against Brandon Marshall, maybe he wasn't quite up to the hype. Gates too was not whole; but the encouraging thing was even with a patchwork line and injuries to Gates and LT the Chargers were able to light up the scoreboard. Matt Wilhelm continued to struggle and Jyles Tucker, while effective in spots, was not confusing anyone with Merriman. Even so the Chargers would move to even their record at 2-2 with victories over Oakland and the Jets. The Chargers were getting surprisingly slack play from both defensive ends; Olshansky in a contract year and Castillo seeming to be too fat and happy with his new contract.

The Chargers would continue their middling ways, losing to the Dolphins by a touchdown but coming back to thump the Patriots who were still struggling after the loss of Tom Brady. It was downhill thereafter however as they would go on to lose to Buffalo and New Orleans, in both instances the defense was faltering badly. Wilhelm was losing minutes to Dobbins by that point and Stephen Cooper was back and the run defense was somewhat better, but the secondary was being regularly shredded. At safety there were some serious issues as Clinton Hart and Weddle both periodically blew coverage, but worst of all was the lack of pressure with extremely vanilla blitz packages. The Chargers were at the bye sitting at 3-5. It was then that Norv Turner made the call to dump Ted Cottrell as defensive coordinator and install Ron Rivera.

The defense did come out looking better in a win against the Chiefs, and had fairly decent games against Pittsburgh, Indy and Atlanta. Unfortunately the offense began to struggle, so that they went 1-3 and were sitting at 4-8 three games out of first with four to play. It was hard to see a path to the playoffs from there, but the team seemed to have shown that it could play well on both sides of the ball. It was over those last four games, victories all, that gritty play and unseen talent began to emerge. Stephen Cooper began playing as we remembered both against the run and the pass. Jamal Williams reemerged as a dominant force in the middle stuffing the run and wreaking havoc in short yardage situations. Macom Floyd filling in for Chambers showed that he had all the tools and was ready to be prime target at wide receiver. Finally this Charger team showed that they could take the pressure as every one of the last four games would have meant the end if they had lost it.

So here we sit on the brink of the playoffs; who shows up this Saturday? You can make the argument that five of eight wins were against sub par AFC West opponents. Of the other three, New England was adapting to life after Brady, the Jets were unsteadily getting used to Favre and Tampa had lost their momentum. What this misses is that the Chargers fought Pittsburgh to a one point loss in their stadium and lost to an excellent Colts squad in the final seconds. This is a team that can play with the big dogs and hasn't been out of a game in the fourth quarter all year. It would have been easy for this team to fall apart, but the center held. This is a good team, those that suggest that they aren't talented enough to be here haven't seen enough of it.