The Raiders have a good running game, but they still need production from Jamarcus Russell to win.  In 2008 Russell has has continued to make rookie mistakes; but he did have a great game against the Broncos.  The Raiders seriously overpaid to bring in Javon Walker at wide receiver in the offseason.  Walker was assaulted in Vegas over the summer having his orbital bone broken; he has made some retirement talk and comes across as being unstable.  He had an ankle injury and is now on the IR leaving the Raiders very thin at wide receiver.  The Raiders picked up Ashlie Lelie, a bust with the Broncos from way back but had some vengence in their game at Denver.  That has been his best game and along with Ronald Curry they have been weak threats this year; certainly Russell is part of that equation.

With a backfield that includes Justin Fargas, Darren McFadden and Michael Bush; they have the horses to run.  While the offense has looked anemic, it roared back in the Denver game.  McFadden still has a bit of turf toe, so that may reduce his effectiveness.  They may also limit his work to avoid injury in a season that has passed them by.  Justin Fargas is likely to be the main ground threat; Michael Bush may see some touches as well.  Oakland has the tenth ranked rushing offense, but is dead last in its passing attack. 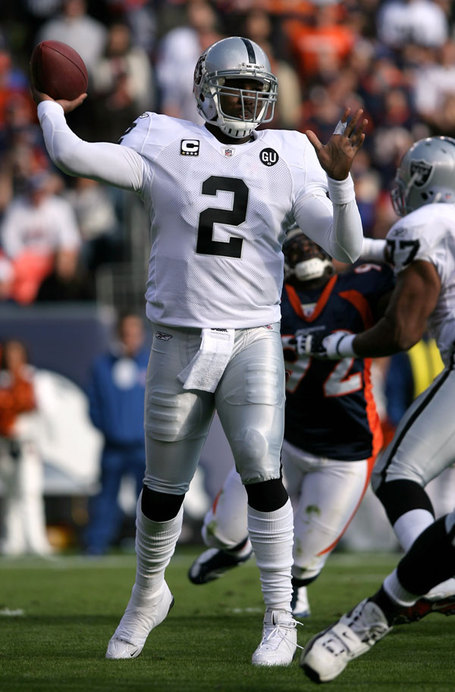 Despite running the ball well the Raiders offensive line is suspect in spots.  They picked up Kwame Harris at left tackle in the offseason, who had a pretty dubious time in San Francisco.  At center they have a second round pick, Jake Grove; the Raiders replaced Newberry who filled in for own Nick Hardwick this year.  Robert Gallery was the number two pick in the nation, but has largely been considered a bust.  Tom Cable, a zone blocking guru has this unit run blocking pretty well, but they don't stand up well in passing downs.  Cable is now the head coach having taken over after the 'Kiffin watch' ended with all parties in a spectacular huff.  It seems strange to pluck the coach from this under performing unit and put him in charge; it's hard to picture him coming back next year.

Zach Miller is the Raiders blocking TE and has turned into a good target for Russell.  His only touchdown this year came when he torched the Chargers in their first game for a huge gain on broken coverage.  In this game the Raiders need to establish the run and keep the ball away from the Charger offense; they will also need to play mistake free football and Russell will need to have a good day.  Unfortunately a lot of quarterbacks have had good days against the Bolts this season.

he Raiders defensive tackle Gerard Warren with 4 sacks on the season.  Tommy Kelly is the threat on the other side with 4.5 sacks.  This is a front four that has not played well against the rush; but the defensive unit has been stingy with yards through the air.  With Asomugha as a corner you have to think that the Chargers will try and run LT again; I sure would like a look at Bennett before the season is over too. 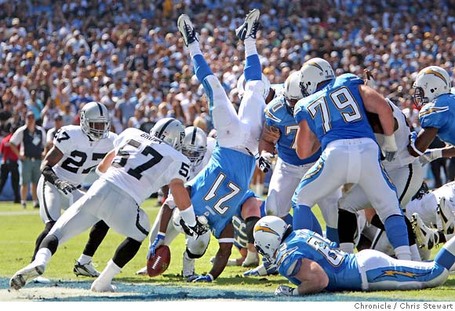 Oakland has the best cornerback in football, N. Asomugha.  He is painfully hard to throw against and therefor isn't targeted very often.  DeAngelo Hall on the other side was released to cut salary earlier in the season.  Chris Johnson has taken over and has two picks already.  At 6'1" there isn't much of a height disadvantage there.  Oakland shelled out big money to bring in Safety Gabril Wilson.  Many have questioned the move, but he does have a lot of tackles and is solid in pass coverage; he also has three fumble recoveries.  Michael Huff has blazing speed which Davis can never seem to resist; but has been made the backup to Hiram Eugene.

At middle linebacker the Raiders have one of our own, Kirk Morrison out of SDSU.  He has picked up 101 tackles, one interception and one sack thus far in the season.  Thomas Howard on the right side had 78 tackles with one pick and one sack.  The left side linebacker is Ricky Brown, but he may be replaced by Sam Williams due to injury.  This is the side to attack for the Chargers; neither looks particularly good.

With Oakland good against the pass but weak on the run; I would expect a more balanced or run based attack.  Whoever Asomugha covers is likely to have a down day; this could be a good day for Gates and Floyd.  For masochists in Boston they can see this match up of 7-17 teams in 3D!  I'm not sure what marketing wizard thought this would be a great match up for a national game; but I'm sure there is a job for him at GM somewhere.