Share All sharing options for: San Diego Chargers vs. the Denver Broncos - Defense

It feels like another season I was scouting the Broncos at the beginning of the season.  Back then Denver's defense looked to be little better than average to me; but in the wake of a series of injuries it currently ranks 30th according to Football Outsiders.  They are particularly weak against the pass; that may be somewhat deceptive as Champ Bailey came back from an injury just last week.  Their rushing defense is just slightly worse than average.  It looks like the second and third targets do much better as do tight ends.  That could mean big games for Chambers, Legedu and Gates; but Jackson does seem to have developed into Rivers favorite target. 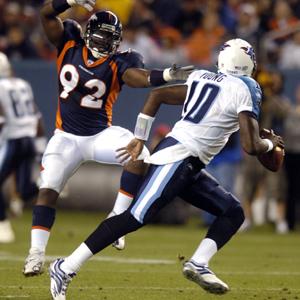 Denver's front four and their backups have put up sixteen sacks on the season.  Their best pass rusher is Elvis Dumerville with five sacks; he will be matched up with Marcus McNeil.  At just 260 pounds he gives up a lot of weight to the 336 pound McNeil.  He is not just used as a pass rush specialist; watch how well runs going left do early in the game.  The defensive tackles have pretty nondescript numbers, Kenny Peterson appears to have done well as a backup with five sacks.  Ekuban and Engelberger will match up against Clary on the right side.  Combined they have five sacks; but are also just a little light at around 260 pounds.  This is a fast defense; but they have been prone to over-pursue at times this year; Norv has put in some sterling misdirection plays lately that might be extremely effective against this group.

DJ Williams is the Broncos most talented linebacker; but he has just come back from an injury last week and has not looked to completely back in shape yet.  In the middle is Nate Webster who has been something of a disappointment; Spencer Larsen filled in for him in Atlanta and was terrific, but Larsen who fills time at fullback too was out with an injury last week.  The Chargers might be able to exploit the middle with Gates over the middle; especially if Denver keeps eight in the box as they most likely will.  Jamie Winborn has taken over on the other side; filling in for Boss Bailey (Champ's brother) who went down early in the season.  He is adequate, but Williams is the only diamond in this group.  One twist in the Denver linebacker corps is Wesley Woodyard who filled in at linebacker when DJ Williams went down.  He has also played well as a Denver backup; so well in fact that sometimes to get him on the field they will pull their safety Marquand and slip him into the box.  Technically they call him a safety; but in reality it is practically a 4-4 alignment.  He may see coverage duty against Gates.

You look at Denver's pass rating and you have to think that their corners are awful.  That turns out to be wrong as Dre Bly and Champ Bailey are both excellent.  This unit suffers as does the Chargers; the defensive ends don't really apply enough heat.  Any reasonable quarterback will pick apart a defense without pressure.  Champ Bailey always plays the same side; so they might be able to get Jackson matched up with the somewhat shorter Bly.  They also bring the safety up quite a bit too help on run defense; but that can leave a lot of territory for the rest of the secondary to cover.  The Panthers had perhaps the ideal offense to tear this unit apart with two amazing running backs that pulled in the safety and the deep threat of Steve Smith to abuse the secondary.  The Chargers game plan will likely consist of trying to establish the run; that both keeps Cutler & Co. off the field and then take the deep shots if Denver adjusts.  If Denver can contain LT without bringing in the safety they are going to be in nice shape.

That brings up the safety; the Broncos picked up Marlon McCree in the off season; but he has faltered badly at times.  He was often a step slow when he was with us last year, now he is a backup.  The Broncos have brought in Josh Barrett who is fast and a big hitter, but also a rookie.  He was playing a mile deep against the Panthers; I presume to keep Smith from busting the big play.  The other Safety is Marquand Manuel and he has been suspect this year.  This Denver's defensive unit is playing whack a mole; they don't quite have the personel to cover all the holes.