It was a Christmas Eve in Belgium Flanders near the ancient city of Ypres ninety four years ago.  Two great armies were arrayed against each other; the army of the Kaiser and the British Expeditionary force.  Just two months previously they were fighting ferociously over yards of territory.  The Germans were attacking and the British exacted an unbelievable toll with accurate, deadly and fast rifle fire.  The Germans would go on to lose 50,000 men, the British toll was 25,000. 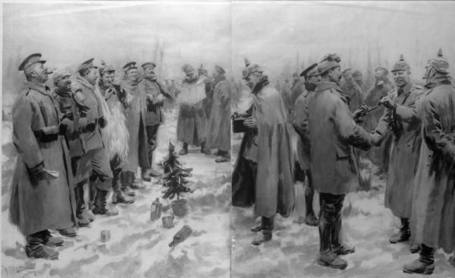 But on this Christmas Eve the snipers were not out and the artillery fire had died down.  After dark the German soldaten began to light candles and place them in the nearby tree branches.  After a while they began to sing 'Silent Night' and the sounds drifted across no man's land.  It wasn't long before Scottish soldiers opposite them began singing Anglican carols.  At some point there were calls for meetings; I have always wondered who the first was to cross that deadly ground.  They met and traded wine and cigars back and forth.  The truce lasted through Christmas day.  There were stories; perhaps apocryphal, of soccer games conducted between the men on both sides.  The killing would go on for four years, the front lines hardly moving from where they were in 1914; but for that one Christmas the two armies held their fire and knew a little peace.