The Chargers have seen a lot of opportunities go by the boards this season; but they grabbed this game like a pit bull and wouldn't let go.  This game didn't start particularly well; they made one first down, but then had to punt the ball away to Tampa.  Tampa Bay with Garcia under center was moving the ball well up the field.  Luis Castillo came up huge tackling a receiver from behind and forcing a fumble.  Clinton Hart came up with it.  The offense came out and didn't just take the field; they owned it. 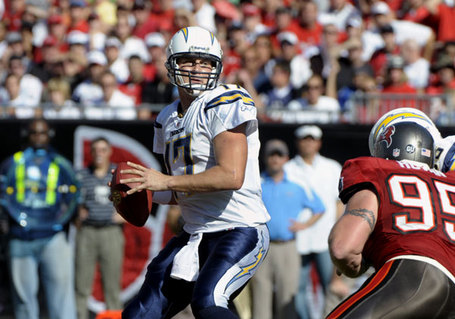 Rivers threw for four touchdowns, 287 yards, 9.4 yards per play, had no interceptions and notched a blistering 136.7 QB rating.

Rivers ripped a big gainer to Antonio Gates; then hit Sproles short on a flee flicker with nobody open deep.  After that LT ran three plays netting 14 yards and the first down at the Tampa twenty six yard line.  Rivers went to Vincent Jackson who seemed to get open at will against the tough Buccaneer defense.  It was first down at the eleven when Norv called an improbable screen to Manumaleuna who rumbled for the touchdown.  It was a four minute drive; it was clear that Rivers and the Chargers were firing on all cylinders.  The ensuing kickoff took the edge off as Tampa's Pro Bowl returner C. Smith busted one for 72 yards with Cletis 'Flash' Gordon barely catching him from behind to stop the score.  The Buccaneer's rumbled in anyway after four plays.

The next drive started off with the Chargers at their own 27 yard line after the run back by Sproles.  LT started off with a 13 yard run off the left side.  Next Rivers hit Vincent Jackson over the middle for an 18 yard gain.  They have outlawed slavery; but for three hours there is no doubt that Philip Rivers owned Tampa Bay corner Phillip Buchanon.  Rivers next went on to hit LT for a twenty three yard scamper.  That was followed by two runs that lost one yard; it was third and eleven.  Tampa Bay put on a good rush and the coverage was good; but Rivers rolled right and saw Gates running across the back of the end zone.  He hit him right in the hands just past the outstretched hands of the coverage.  It was 14-7 and this game was just getting warmed up.

Tampa Bay came out and Jeff Garcia was throwing strikes.  He hit Bryant for an eleven yard gain; then Cadilac Williams ran the ball for four yards.  Garcia hit Bryant right in the chest but his ace receiver inexplicably dropped it.  He hit him again with the same results; the Bolts defense just got lucky on this drive.  San Diego took the ball from their eleven yard line and drove it to the Tampa ten before settling for the field goal.  Legedu had two big catches on the drive; Chambers had a nice 17 yarder as well.  Rivers was playing like the Pro Bowler he ought to be.  After several three and outs; the Bucs mounted a drive that netted them a field goal.  On one play Antonio Bryant had beaten all coverage; but Garcia just barely overthrew him.  Clinton Hart was not on top of his game today.

The Chargers got the ball back with a scant ten seconds left on the clock before half time.  I awaited the kneel down; but the Chargers went deep and scorched Tampa for 25 yards with Kaeding coming in to drill a 57 yarder to end the half at 20-10 Chargers.  This was the perfect call and along with a flea flicker earlier showed that Turner was going all out.  Up by ten at the half things looked good; but you had to be nervous with Garcia out there. 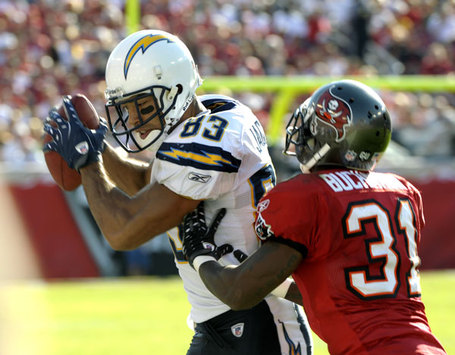 Sure enough Garcia took the opening kickoff from the twenty three and orchestrated a thirteen play drive that was a beautiful blend of passes and runs.  The final play he ran in from seven yards out with Antoine Applewhite waddling behind him.  Garcia reminded me some of Rivers; his passes aren't perfect but he plays with a lot of grit and finds a way to get things done.  Sproles returned the kickoff for 44 yards which the network somehow found unworthy of showing; not even a replay.  It went for naught however as San Diego went three and out; giving the ball back to Garcia.  This time Garcia didn't need thirteen plays, just three.  On first and ten from their twenty nine Garcia hit a wide open Antonio Bryant just as Garcia was leveled by the pass rush.  Eric Weddle had abandoned coverage too early, Hart scrambled to recover and all of a sudden the Bolts were down by four, 24-20.  Jeff Garcia had shifted the momentum in this game.

The Chargers have had their backs against it before; and weren't going to go gently into that good night.  Tomlinson, Rivers and Vincent Jackson put together a methodical, irresistible drive down to the Tampa five yard line.  There, on a play very similar to the earlier pass to Gates; Rivers found Gates again to go back up by three.  Despite Tampa's vaunted defense this was becoming a shootout.  Tampa got the ball back; but the Chargers were starting to get just a bit more heat on Garcia. On second down Garcia had to throw the ball away; he was still in the tackle box and so got hit with intentional grounding setting up third and forever.  The hits seemed to catch up with him as he threw an unusual pick straight to Stephen Cooper.  Stephen Cooper has four picks in his last three games.

Turn about is fair play however and on first down Rivers proceeded to get called for intentional grounding.  That turned into a three and out and Garcia had the ball back with just twelve minutes left.  This was a drive where Jamal would come up big and several times stuff runs.  Jyles Tucker ended the drive with a sack and coupled with the hits he was taking on bootleg plays Garcia looked just a bit rattled.  Sproles returned the punt for 43 yards and set San Diego up with yet another short field.  This game he was absolutely the little back that could.  Two runs for first downs to Tomlinson; then a short run to Sproles and Norv went to one more screen play.  Sproles broke it for the TD weaving his way 32 yards to put the Chargers in command. 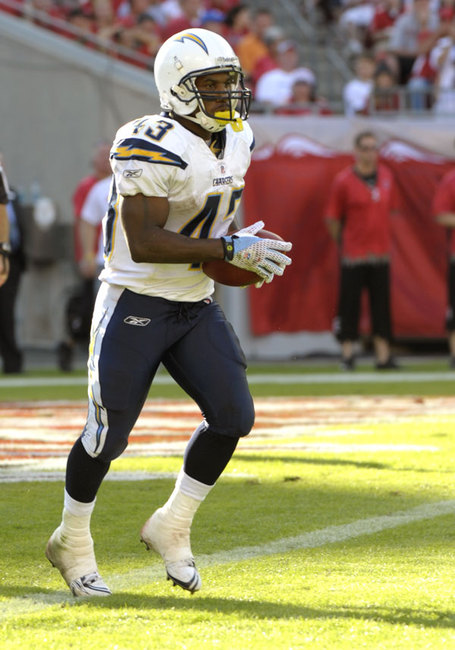 Sproles after his Touchdown

The game was not over however and Garcia came out passing and running once again.  On the third play of the drive he ran the ball; this is not a quarterback to hook slide he goes after every yard.  Quentin Jammer came up and leveled him; knocking Garcia's helmut into his nose.  Garcia would drip blood from his nose from that point on.  Still he managed to hit a series of short passes up to about mid field.  The Chargers were rushing three by that point, Jammer finally managed to tip one of Garcia's passes up and Cason grabbed the interception.  Cason would race 59 yards to insert the final dagger.  This is a Charger team that has taken a lot of criticism and any number of analysts speculated that Norv had lost this team.  They have come back against all odds; this is a team that fights to the end.  Coupled with Denver's loss against Buffalo, the Chargers have one final shot at winning the West and making the playoffs when they play Denver next week at the 'Murph'.