When you are down by eleven points at the two minute warning and end up with a win; the football gods are smiling at you.  The Chargers got outplayed for most of this game and looked to see their playoff hopes finally flat line, but Rivers had other plans and for this week the ball bounced to the Chargers.  Once asked if he wanted a skillful general, Napoleon replied that he wanted a lucky one, he could teach him everything else.  While I don't mean to take anything away from Rivers phenomenal comeback; the catch to Chambers where he lay stunned after a ferocious hit but had just enough left to grab the ball for a big gainer and then the onside kick where the Chiefs best receiver dropped the onside kick, and who else but perennial special teams Pro Bowler Kassim Osgood came up with it, were just outrageous good fortune.  The Chargers have two wins against the Chiefs by one point; each with the Chiefs in a position to win at games end.

Next week the Chargers will need to beat a good Tampa Bay team still fighting for the playoffs at home and the Broncos will have to lose to mediocre Bills team that is out of the playoffs at Denver in order to continue the Chargers improbable hopes.  But enough, on to the grades:

Quarterback - A-
This was hard to place; Rivers actually played poorly for much of the game with a pick off and fumble as well as numerous failed drives.  But how can you not give an A to the QB who brings a team back from the dead with huge passing plays when the defense knew he had to throw the ball?    Folks on SBN have all kinds of images of Rivers making ridiculous faces; it's because he cares.  You see some other quarterbacks when things are going the wrong way and they are looking at their shoes; Rivers always brings fire and I'll take that every day of the week. 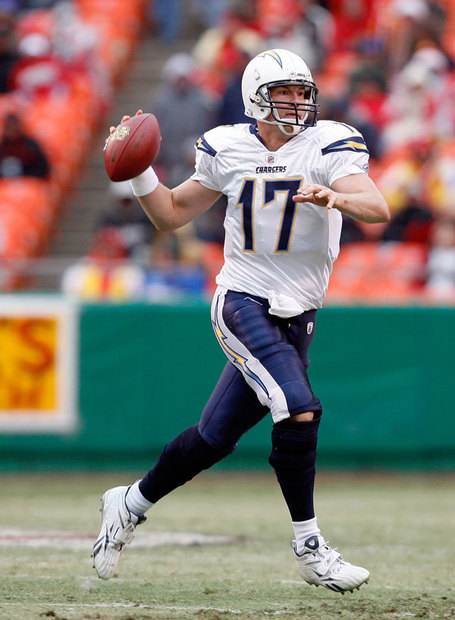 Wide Receivers - B+
They had some trouble getting open early; but the final two TDs went to Malcom Floyd and Vincent Jackson.  Jackson also had the huge pickup on the final drive that placed San Diego in position to win.  Chambers play where he managed to hang on despite the wicked hit was crucial as well.  On the down side Jackson had a fumble in the first half that really set the Chargers back.

Running Backs - C-
Some very nice screens; but LT was stymied behind poor run blocking again.  He also has been dropping passes that nobody should drop; 3-4 in the past few weeks.  One big gainer was called back on a holding call; once again penalties were horrific.  Hester ran some nifty screens and had ran a second fake punt for the first down.

Offensive Line - D-
Weak run blocking and the Chiefs were getting at Rivers.  The Chiefs with 6 sacks all season coming into the game took Rivers down three times and had a number of hurries.  OK, Dielman got thrown out early on an egregious call and Hardwick went out with a concussion; but the Chargers need a free agent or high draft pick to be used on the line this off season.

Tight Ends - B-
Gates was back, he nabbed more than seventy yards in passes.  Like LT he too had a drop on what should have been an easy catch.  Manumaleuna came up with a big catch as well.

Defensive Line - B
This is a tough team to get sacks against because Thigpen is so mobile and they protect him pretty well out of the shotgun or pistol.  Jamal was huge again; he almost buried Thigpen on one play, and was playing on the Chiefs side of the line most of the day.  You have to think Jamal was lurking in the back of Herm Edwards mind when he decided to punt late in the game on a fourth and one.  They held a good rushing Chiefs team to just over 100 yards and a stingy 3.3 yards per carry.

Linebackers - B
Stephen Cooper is just playing out of his mind.  He had another pick after two last week, led the team in tackles and had two PDs to boot.  Antwan Applewhite is playing very well too; the last two weeks Rivera seems to be leaning on him rather than Wilhelm and was actually the teams second tackler with six tackles.  He doesn't look as sharp in pass coverage to me.  Also take a close look at who get his hat on that onside kick; it's Antwan.  Shawne Phillips did get some pressure; but made a boneheaded play near the end of the game that gave KC the chance at the field goal; please note that he pushed Cason into the ref.

Corners - C
Jammer was burned for the TD and got hit with a pass interference call.  He bounced back in the second half; the wide receivers for the Chiefs were mostly quiet.  I didn't notice Cromartie very often and he had no statistics.

Safeties - C
It is strange to call holding a tight end to 67 yards and a TD as a good performance; but when that tight end is Tony Gonzales you count yourself lucky.  Gregory and Weddle were somewhat over matched; but did well enough.  Weddle did get the PI on the ball that Gonzalez caught for a TD anyway.

Coaching - C
The offense was stifled in the first half again; the defense gave up a 90+ yard drive and the Chargers had to get a red zone turnover just to keep it from turning into a blowout.  10 penalties for 80 yards; the chiefs had just 30 yards so we gave up 50 net yards.  We are second in the league in delay of game penalties; it's just not acceptable at this stage in the season.  And the final kick off was a squib kick?  Seriously?  We have good coverage on returns; boot it deep!  We just got lucky that it was wide.  On the plus side I did like the reverse and the fake punt; and lets face it Norv has not lost this team.  These guys are still playing hard; they do not belly up no matter what the score nor who is opposing them.