Here is the link to the prior scouting article from the previous game. One new wrinkle this game is Larry Johnson will be playing. He has been a huge distraction to the Chiefs with his off field fiascoes; but there is no doubt that you have to game plan against him. Johnson is a talented back, but the Chargers have been making big strides in their run defense since the resurgence of Jamal Williams and Stephen Cooper's return in week four. Here are Johnson's current stats: 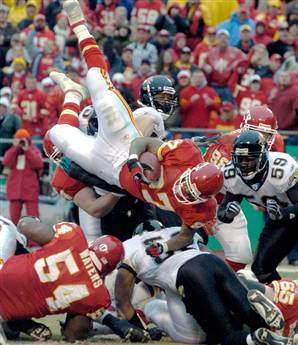 In watching the Denver/Kansas City game last week I had to appreciate how well the Chiefs run out of what they call their Pistol formation; I'm going to call it the sawed off shotgun; just because it has a better ring. Football Outsiders have an excellent description of it here. The sawed off formation makes it hard to get pressure on Thigpen and gives him the option to hand off to Johnson behind him; throwing or bootlegging it. The Chiefs have gotten very good at faking the hand off to the running back; I often found my eyes following the wrong player. Johnny Dub checked out Thigpen last week and had this to say; and Arrowhead Pride has a piece on him here. Most analysts seem to think that the Chiefs will use their number one draft choice to grab a 'franchise quarterback', if I were a Chief fan I would want to see Thigpen get a full shot first.

Tony Gonzalez has taken Thigpen under his wing and is Thigpen's primary receiver. He poses a real problem to the secondary as corners tend to be a bit small to cover him and linebackers are just too slow. In one pass against the Broncos the ball appeared to be headed for a Bronco corner; Gonzalez just muscled in and took the ball; it was in the air so it wasn't pass interference. He also made a beautiful sideline catch that was close enough to be challenged. If the Chargers are going to be beaten; this Pro Bowl tight end is going to be an integral part of it. The other true receiving threat will be Dwayne Bowe; he is a big target and has racked up big yards against the Bolts in prior match ups. In the last game Gonzalez had 113 yards, Bowe 72.

On the bright side the Charger defense has been getting appreciably better each week under Ron Rivera. Last week against Oakland they were terrific; granted Oakland came out flat and just went flatter. In the last game the Chiefs only moved the ball well in the first half. In the second half the defense forced five succesive punts; and on the final drive the Chiefs were helped out by a bad pass interference call on Hart for what would have been another stop. That was an offense without Larry Johnson however; this is not going to be an easy win. Be sure to check out Arrowhead Pride to get the view from other end of the telescope; it's well worth the visit.