Chris Chambers
Last year the Chargers offense really ignited when Chambers became integrated and was a consistent target. He not only was catching for good yardage; but he also took pressure off of Vincent Jackson who suddenly developed into the deep threat everyone had hoped for. Prior to Chambers teams could stack eight in the box; double cover Gates and feel pretty secure. That extra threat plus the development of Jackson really allowed the offense to take off. Last year Chambers caught 35 passes for 515 yards; he also had about 400 for Miami, so nearly a 1,000 yard year even with switching teams. At 5'11" he is somewhat shorter than the other Charger targets, but he is listed at 210 pounds so he is not a small receiver. His yards after catch are just 2.8 this year, he is not terribly elusive.

This year he looked primed for big things; early in the year he didn't have many catches but a number were for touchdowns. If you saw him torch Champ Bailey for the TD in Denver early in the season; you saw that he still has all the skills. Right now he has 26 catches for 357 yards; but five are for touchdowns. Mid-season he had a high ankle sprain which limited his receptions and he has not been targeted as much since. Over the last four games he has a skimpy 131 yards and no TDs. He is signed through 2009; but it is hard to picture the Chargers keeping him beyond that point with their current depth. Football Outsiders ranks him at 43rd at the position; his catch rate is somewhat low at 52%. 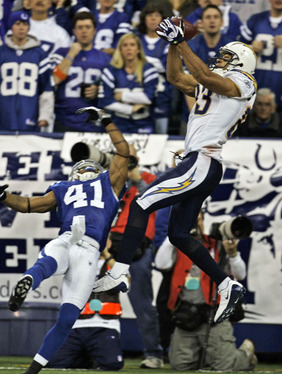 Vincent Jackson
After Chambers came on board last year, Vincent Jackson really came alive. Up until that point it looked like he might be a bust; he was often injured and didn't seem to be able to get open. When Keenan McCardell slowed down; Jackson was not able to pick up the slack. I'm not sure if it was the top cover guy getting put on Chambers or the easing of pressure; but Jackson really came into his own; especially in last years playoffs. Both he and Chambers were averaging nearly 100 yards per game in those three playoff games. Jackson ended last year with 41 catches for 623 yards and three TD's, but in the playoffs he had 300 yards and two TD's. At 6' 5" he does have an advantage over shorter corners; going at 230 pounds he is big enough to take a hit.

This year he has really lived up to his promise. He is at 850 yards on the season with 6 TDs and has really been the number one receiver threat. He does have a tendency to drop some passes; his completion rate of 52% is fairly low and a few of the drops would have gone for TDs. The upside is that this year his yards after catch have gone up to 4.3; he is getting behind the coverage much more often. His average catch is just under 20 yards so he has caught a number of deep ones this year. Football Outsiders has him ranked as the number six receiver in the NFL; number three if you look at yards per play. That is some elite company to keep; if he rids himself of the drops he could become the best in the league. He is going to cost some money; but the Chargers should struggle to keep Jackson on the roster after his contract expires in 2009. I would love to see the Bolts sign Jackson to a five year deal this year.

Malcom Floyd
Who is this guy (and what happened to the l in his name)? Every time he has had an opportunity he has excelled. He is catching everything thrown remotely in the same zip code; his catch rate of 71% puts him at the top of receivers and he is doing that while averaging 18 yards per catch. He would be starting for almost any other team in the NFL; the Chargers depth at wide receiver is nothing short of amazing right now. One thing AJ could do in the off season is trade Chambers (and his big contract) to another team to get another pick in the draft. Given his injury; I'm not sure how much interest there would be right now. Floyd's opportunity this year really came when Chambers went down with an ankle injury. He has 22 catches for just under 400 yards with two TDs.

Malcom is another big target at 6'5"and 225 pounds. AJ has made some mistakes this year, but lets give him some credit here; Malcom is an undrafted free agent out of Wyoming from 2004. He is fast developing into a favorite target of Rivers; picking up five catches against the Falcons but only one against Oakland. Football OUtsiders has him ranked as the number one receiver in the category of 44 catches and under. His DVOA ranking would put him 20% higher than the current leader in the over 44 catches category; he is having a ridiculous season. To some extent this is explained by the coverage that Jackson and Gates often draw; but there is no question that Floyd is catching everything that comes his way. He was an exclusive rights free agent; I hope they are actively pursuing a contract.

Legedu Naanee
I really expected Naanee to make some noise this year. He is reportedly one of the most athletic players on a talented roster. The Chargers just have so many targets; Naanee has ended up the odd man out. He was drafted out of Boise State in the fifth round. Norv tried to turn him into a fullback/TE/WR; but that must not have gone well because this year he is a straight up wide receiver. One thing he brings that none of the other receivers match is YAC. He is averaging around 6; admittedly in very few catches. This is another reason why I think if we could unload Chambers; it would free up dollars and underutilized players like Naanee.

Buster Davis
I'm biting my tongue here, I'm not yet classifying him as a bust; Jackson took the full three years to develop. There was one game where he had three huge third down receptions and you could see the promise; but he just can't keep himself on the field. He has struggled with a groin injury ever since getting on the roster; hopefully the surgery he had will be a factor next year. 4 catches for 59 yards this season; 20 catches for 188 yards last season. For a number one pick those are awfully weak numbers.