Considering this was a game they had to have the Chargers came out flat. At home after the bye, the defense would give up two long TD drives and the offense would bog down and settle for two field goals, and then give up the int right before the half. Give the Chiefs full credit; they did not look like a 1-7 football team. Thigpen was throwing well and they mostly held the San Diego offense despite having numerous injuries that left second and third stringers in their lineup. This was a game I expected the Chargers to dominate, but the Chiefs showed up with grit and were surprisingly stout against the run. This looks like a team that is moving the right direction and it is going to be trouble down the road.

The story of this game for me was the way the Chargers defense showed up in the second half. They forced five consecutive punts from KC; once immediately after an interception. While they gave up the final TD drive; a lot of those yards came from a highly questionable PI call. They also forced KC to a fourth down once; and in the end Hart made that one big defensive play that has been eluding the Bolts this whole season. 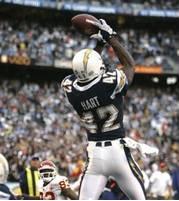 In a stiff wind some of Rivers passes were not as crisp as they needed to be. He also overthrew LT on a crucial third down in the red zone resulting in a San Diego Field goal. At the end of the first half he was picked off in the endzone killing what had been a good drive. He came out sharp in the second half throwing the TD to Floyd, but also burned two time outs trying to audible at the line and then had the killer interception trying to avoid the sack. For all that he threw for 300 yards with 2 TDs and two interceptions. In crunch time he was eight for eight on the final drive.

Vincent Jackson had another drop, but otherwise looked reasonably sharp. The wide receiver who was money this game was Malcolm Floyd who made a remarkable juggling catch on the sideline as well as catching the TD in the second half to tie it up. This kid is just lighting it up; you have to love the Chargers depth at wide receiver. Legedu Naanee came up big with a fine third down catch as well.

Antonio Gates was tremendous; along with the other wide receivers the Chargers definitely have an impressive array of weapons through the air. He came up huge on the go ahead drive in the second half on third down; and then for the go ahead TD.

They gave up two sacks; and the running game against an anemic defense with multiple injuries was limp. LT appeared to be running hard, but even after making two or three tacklers miss, he would be back at the line of scrimmage; the line was allowing penetration. It improved a bit towards the end of the game, but what has become of the offensive line that used to pummel opponents into submission?

LT was running hard, but really didn't have the holes to run through. Fullback Mike Tolbert made several nice runs after short passes; and lateraled one to LT for a nice gainer. LT began moving better in the second half, juking one KC defender out of his cleats; then running for 20 yards. LT also passed OJ Simpson and Corey Dillon on yards, he is now in 15th place; he needs just 74 yards to pass John Riggins next week.

There was still not enough pressure on the QB; but they did do a nice job of containing the running game. Jamal Williams was great in the center, and Castillo made a couple nice tackles. Jamal came up huge more than a few times in getting penetration and stuffing the run; and in one instance getting in Thigpen's face just as he was throwing to force an errant throw and subsequent punt.

They ran hot and cold; Jammer gave up the TD early when he just gave up on the receiver; but would redeem himself with I believe three huge third down stops. Cason came up huge on another third down stop off Rivers turnover in the second half. Cromartie had a nice chip that cost the Chiefs a third down conversion too. Overall they looked to play much more man to man and were able to help force a series of three and outs. While Hart was called for PI right at the end of the game; it was clearly a blown call on what was a terrific play.

While I didn't see any specific mistakes; Gonzales had a huge game and there were several plays where the safety help to the inside seemed slow. Weddle made some nice tackles for short gains on short routes. The high grade is almost entirely for Clinton Hart who both made a terrific play in the fourth quarter that the officials somehow turned into a PI call, but then made the play at the games end to deny the Chiefs the two point conversion and iced the Chargers victory. After having been unfairly flagged, having missed the game saving play against the Panthers and having been called out for poor play in the press; that had to be most satisfying.

Marques Harris came close to getting a sack, and they were really attacking the run. While there wasn't as much pressure as you would hope for; they were really diving in at the line on the blitzes. This team has really come a long way against the run; they still have a ways to come against the pass. For the Chiefs third string QB to come into the Murph and end up with a QB rating that looks like Manning spells trouble. It was also yet another game without an interception; or turnover for that matter.

The defense in the first half gave up the big touchdown, but did seem to force more third downs. The offense came out flat, and I still would like to see them run the ball more. I would have expected the staff to have them come roaring out, but that just didn't happen here. Rivers is starting to try and force things when they aren't there; and had more than a few balls go out waffling in the wind. There were also two instances of Rivers calling timeouts because of trying to audible a play late in the count; not to mention one delay of game. You can blame Rivers for the mistakes; but you would expect Turner to be working with him on knowing when to throw the ball away.