In the past four games against the Chiefs LT has run for 132, 177, 199 and 66 yards.  In the 66 yard game he had six catches for 72 yards.  This year the Kansas City Chiefs have been giving up 180+ yards per game against the rush.  The Chargers defense has not fared well when it has been left on the field.  The plan of attack for the Bolts is likely to run early and often.  LT should be able to rack up runs against this porous Chiefs defense and keep our defense on the bench with long clock chewing drives.  The Chiefs also rank 21st against the pass so I would expect the pass to be effective to, but there is no doubt that the surest way to a W would be on the ground. 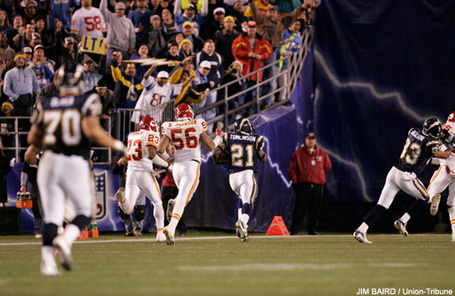 LT creates a trail of tears for the Chiefs

Glenn Dorsey, a first round choice in last years draft has largely been a disappointment to the Chiefs.  Their linebacking crew, which includes former Charger Donnie Edwards, has likewise not been stellar in containing the run.  If the Chargers do go to the passing game, has shown a completely anemic pass rush.  The front four has accounted for only two sacks thus far; the entire team has only four sacks over the first eight games.  As a frame of reference the Bengals have the next lowest total with nine sacks.

Rookie Brandon Flowers has performed well at the right corner; he has picked up two pick offs and has 37 tackles.  The number of tackles is largely a reflection of the front seven not doing their job however.  At 5' 9" he might be vulnerable to our taller receivers; he also was out against in the second half with a hamstring issue so he might not play.  Brandon Carr on the other side has also picked up two interceptions and likewise has tackles in the thirties.  The Chargers are big favorites at home, desperate for a win against a rebuilding Chiefs team.  That said the Chiefs have come within a whisker of beating the Jets two weeks ago and last week; so they come to play.  The Chargers can't be looking past them to .