As Chargers fans we know all to well about what Michael Turner brings to the Falcons running game. Thus far Turner has been having an outstanding year: 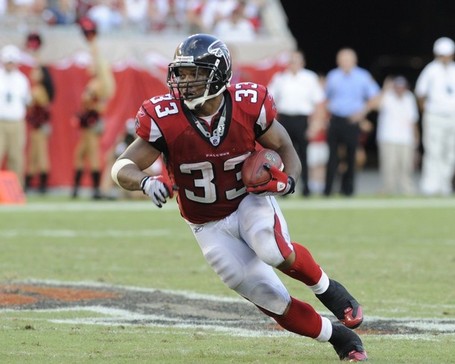 Turner's backup J. Norwood also runs the ball well; but has been battling a rib injury and has seen limited practice this week. What has surprised me about these Falcons is the performance of their rookie quarterback, with 11 TDs and only 6 picks, he comes in with a healthy QB rating:

This a much more balanced offense than the Chargers, they have run and passed the ball well and that could spell trouble this Sunday against what has been a generous Chargers defense. Roddy White and Michael Jenkins are the wide receivers with White being the primary target. I would look for Jammer to be placed on White which should lead to an interesting matchup of Cromartie on 6'4" Michael Jenkins. The Falcons throw very little to their tight ends and their primary tight end Ben Hartsock will be out for the season with a dreaded toe injury. Justin Peelle is his backup; given the Bolts trouble covering tight ends we will have to wait and see if how much Peelle gets thrown to.

On defense the Falcons run a 4-3; the real pressure usually gets brought by John Abraham with 12 sacks on the season so far. He has been limited in practice with a neck injury; but it would be surprising if he didn't play. The rest of the line has chipped in with five sacks. The Atlanta line looks a little bit light with the exception of Right Tackle Grady Jackso who comes in at 345 pounds. The run defense has been a little suspect for Atlanta:

You can see they are giving up about 120 yards per game; it will be interesting to see if the Chargers can get a lead and run LT with some success. With Jackson at Right Tackle we may actually see the Bolts test runs to the right. Their defense has also given up yards through the air; but their corners are all bout 6', so there aren't any severe height mismatches that I see. Football Outsiders shows that their coverage of the secondary wide receiver and running back have been particularly spotty; so look for Floyd and LT to have big receiving days perhaps. Eric Coleman at free safety has picked up three interceptions. Overall this looks like two very good offenses against two defenses that have given up yards, it should be an exciting and high scoring contest.