In thinking about Mims and the Steelers game it got me thinking about assembling the best players across the years.  So here is my opinion for the offense:

You can think about John Hadl who had 3,000 yards in shorter seasons, but there was nothing like Fouts when he was on his game.  He just had incredible touch and a feel for the open receiver.  Rivers is good, and may get to Foutsian status, but he isn't there yet.  Unitas was great, but not as a Charger. 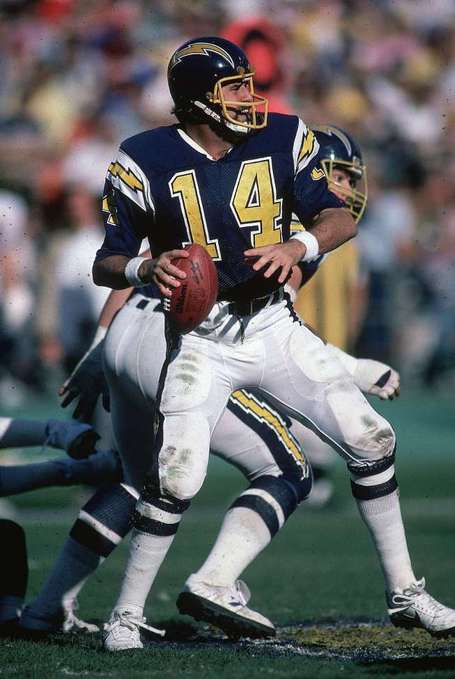 Dan is the Man at QB

This is a hard choice; there have been so many amazing receivers over the years, but Alworth with five 200 yard games and the HOF membership has to get the nod.  While I'm not quite geaser enough to have watched him play; the highlights show just an amazing talent.  You can argue about Joiner, Chandler and Tony Martin, but for me nothing beat JJ going up and snatching a ball you knew couldn't be caught.

McNeill may be a stretch; this being his third year and him struggling a bit; but in 2006 he was a huge part of the year that LT put together.  Wilkerson and Washington were part of the group that powered Chuck Muncie back in the days.  I'm less familiar with the older lines so I could be missing some possibilities there.

This was the hardest choice; Kellen Winslow redefined the position; but Winslow had Fouts throwing to him; Gates has done much of his heavy lifting with marginal quarterbacks and has stayed remarkably healthy in the process.  I also see Gates as being the superior run blocker; Gates is the most complete tight end.

Just the best we ever had back there.  I'm big fan of Tolbert's, but lets face it part of the running game let down is not having LoNeal paving the way.

There have been some good ones; Chuck Muncie, Natrone Means and Marion Butts, but LT is hands down the best back to take the field for the Chargers.  There is no way for me to pick anyone else here.