Our programmer at work ended up with an extra ticket and invited me at the last moment, so 5:15 found my butt near the forty yard line watching Manning and Rivers going at it.  I never really get a good perspective when I go to the game, so I'm going to dispense with the grading and just describe how it felt.  The first quarter was owned by the two defenses.  Both sides knocked the opposing offense off stride; the Chargers tried the running game and did two 3 & outs to start the game.  The defense came out fired up and did a terrific job stopping the Colts in that first quarter.  This whole game Jamal Williams looked like Godzilla out there, just tearing up the turf on the Colts side of the ball, all that was missing was some Japanese folks talking out of synch and weeping over the carnage. 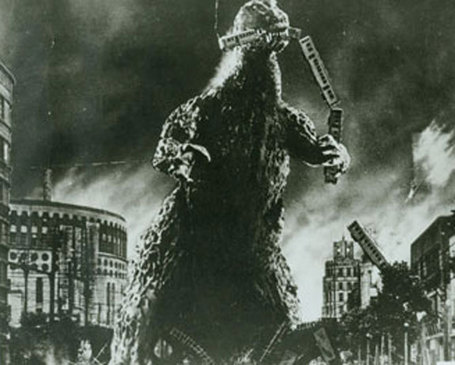 A Vinatari field goal was the only scoring in the first quarter; finally the Chargers offense got on track, but then failed to get the TD and had to settle for the short field goal.  Malcolm Floyd came up with a huge catch on the drive; he is working his way into becoming the number one receiver.  When you go to the game you come to love a Chargers score, not just because it is a Chargers score, but because then you get to watch Anthony Waters and Antwan Applewhite.  They are huge hams who work up the end zone crowd.  These guys are just out there having a blast and it's a kick to watch.  On the next drive the Colts started driving and Manning took a shot deep.  Quentin Jammer caught up to it just in time and made a spectacular pick; I usually don't think of him as having great hands but this was just a great snatch.

Rivers and the offense took full advantage and drove the length of the field for the TD, momentum was going the Bolts way.  But on the next drive Dominic Rhodes, who came up big all night for the Colts, caught a TD pass to cap off a nice drive.  The Chargers final drive of the half was conservative and the teams went in tied up; but the Bolts were going to get the ball after halftime.  The Chargers came out and started moving right down the field; picking up just where they left off.  Unfortunately Mathis came through unblocked from the blind side and forced a fumble that the Colts recovered.  Manning took full advantage driving in for the touchdown.  It looked like the Bolts might pull off the goal line stand; forcing a fourth and one, but Manning found Rhodes who was being covered by Cooper.

Let me talk about the crowd for a moment; it was LOUD.  Peyton burned two time outs and had one delay of game.  I always hear how SD fans are all band wagoneers and have no heart, but the stadium was rocking for this 4-6 team.  My voice is done today; but it was well worth it.  At one point Manning had to whack his center to come out of his stance because the center couldn't hear that Manning had called the timeout, my ears were still ringing a few hours after the game.

The offensive line gave up a key sack on the next drive and the Chargers were forced to punt.  On the next drive Jamal Williams sacked Manning and looked to set up a stop.  It was third and seven when Clinton Hart appeared to make a key play knocking down the ball; but the refs called pass interference.  The refs followed this up by channeling their inner Hochuli's and blowing dead an apparent fumble caused by Cason; not reviewable because of the whistle.  The defense stood tall though and limited Manning to just the field goal; Ron Rivera really has this defense playing much better.

The Bolts took the ensuing kickoff and marched it methodically down the field.  I never saw Tolbert get hurt, but Hester was in at fullback, and he was terrific.  He caught three passes on the drive; including the TD.  It was really nice to see him get a shot in the game; Tolbert was the first to come up to him on the sideline after the TD.  There were about six minutes left and the defense had to make a stop.  S. Phillips would come up huge on third down in the backfield to force the 3 & out.  Rivers would have time to drive.  The Chargers were driving well, but then a penalty and just a flat drop by LT led to 3rd & 15.  Rivers picked up 13 to Manumaleuna but inexplicably the Bolts called a timeout.  Kaeding came up big with a 47 yarder, but the Chargers had left a minute and a half for Peyton to work with.

On the following drive Weddle appeared to come up big, sticking a receiver short of the first down after being reviewed.  On the fourth and one the Colts went big and Manning under pressure got to a wide open Harrison; Jammer had been thrown off the coverage by running into a ref.  From there a two yard run set the stage for Vinatieiri to get his redemption and kick the 51 yarder for the win as time expired.  It was a sad end to the game.  As we left the game some fans were growling their frustration.  For myself, being part of the crowd and watching the defense come up with huge stops was amazing; the end was a killer, but I wouldn't have been anywhere else.

It was a pity because the Broncos left the door wide open for the Chargers; this AFC West championship is becoming a race downhill.  With the loss to the Raiders the Chargers should own the conference record if they end up tied with the Broncos.  The way the ball has been bouncing; it is hard to picture right now.  The Chargers have to pick up one game playing Atlanta, the Raiders, KC and Tampa while the Broncos face the Jets, Carolina, Buffalo and KC.  I see the Chargers beating KC & the Raiders (though both these teams have been playing better); that leaves our season up to beating Atlanta and Tampa.  I don't see Denver winning out; that leaves a slim opening but one where the Chargers don't control their own future.