Another Sunday, another gut wrenching loss.  This time the offense faded while the defense limited the Steelers offense to just nine points.  Despite the agony of defeat; I enjoyed watching the Chargers hanging toe to toe with one of the great defenses of the AFC in weather cold enough to see players breath.  The goal line stand by the defense was a thing of beauty after having been maligned all year, but the offense followed up with a safety and then turned the ball over twice and would end up with just ten points.  To be fair the defense allowed did allow very long drives, time of possession went heavily against the Chargers (36-23).  Coupled with the Denver comeback win at Atlanta you have to say that this puts a serious dent in post season hopes.  While there is still time to make up ground; the Bolts would need help from the Broncos.  You can still see the talent flash occasionally, but right now there is no getting around that we are not winning the close games.

In terms of yards given up the Steelers also dramatically out gained the Chargers; 410-213.  It was also nice to see LT break into the end zone for the first time in four games.  The other development on defense was a strange statistic virtually unknown for the past few games; they are called sacks. 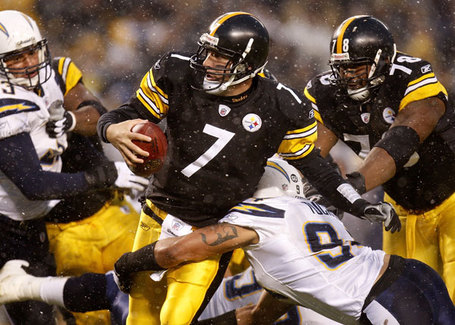 Finally, change we can believe in!

The Chargers picked up four of them, which along with penalties killed off or limited Pittsburgh's drives.  It's always nice when somebody you don't expect picks up the pace, today you have to give Jacques Cesaire credit for two sacks and one batted ball.  I have been dying to see him do well ever since seeing the video of him cracking up the London guard.  Unfortunately Luis Castillo went down in the third quarter, we will have to wait and see how that shapes up.

Jamal looked good and what can you say about Cesaire?  Not just two sacks, but he was also delivering solid pressure even when he didn't get there.  More's the pity he went down near the games end with an injury.  Willie Parker did rack up 115 yards, but the long was 13 yards.

This run defense has really improved with the return of Stephen Cooper.   The coverage over the middle by linebackers is still wanting; but it was nice to see S. Phillips, J. Tucker and Cooper all get at least part of the QB.  Why the C?  The coverage over the middle still isn't there, until that gets solved teams are going to drive all day on us.

Anybody else impressed with Paul Oliver?  He came up with seven tackles; and you have to say when the Steelers are racking up that many yards and plays, but only nine points, the plays are not getting past the safeties.  Clinton Hart really seemed to be going all out again this game; one play near the end of the game he came flying in out of nowhere to cut down the ball carrier.  He has been burned a lot this season, but he is never phoning it in.

Quentin Jammer deserves to go to the Pro Bowl; two PDs and making tackles, every week he is giving his all.  Cromartie seemed to pick up his game some, but he was another player that had to be walked off the field near the games end.  That Pittsburgh turf just seems to eat players up.

Rivers has had a great season, but he is making mistakes too often now.  The two interceptions were part of what kept the defense on the field; it's hard to go -2 on turnovers against the Steelers and come away with a W.  Sometimes in the post game comments I think he takes too much blame for the losses, which I admire, today he just wasn't good as he picked up just 159 yards and ended up with a QB rating of 47.

Jackson had a drop, but they also made some nice sideline catches in the drives at the end of the game.  For the most part I thought they did well catching balls; Rivers just wasn't on his game today.

Manumaleuna had the big catch today, but it was disappointing that Gates was not more involved in the game today.  He was limited to just two catches for ten yards.  Maybe it was the weather that decided Norv to keep the ball on the ground, but I had really thought they needed to work that depleted Pittsburgh secondary.  I was disappointed in the offensive gameplan.

LT did some fine running against a great defense, but at the end of the day a 3.2 yard average is not going to get it done.  I really felt they needed to open up the passing game and a lead before pushing the running game.  It was nice to see him in the end zone again.  One thing I did like were the short yardage carries by Tolbert, the Bolts managed to make those every time against a good defense.

Again they bear some of the blame for the meager running game; they did seem to pick up some of the blitzing very well.  Rivers was sacked just the two times.  There were times when they opened some big gaps for LT, but they have to be able to do it on a consistent basis.

The Kaeding miss was just one more in a series of plays that could have put up a W.  Instead the fat lady is tuning up...

I liked the defensive effort and game plan.  Pittsburgh's offense is not the best, but allowing just 9 points with a -2 turnover ratio?  That's a terrific improvement for a beleaguered unit.  I was much less enamored of the calls on the offensive side of the ball.  This was a hurting Steeler secondary; the conditions were tough for going deep, but shorter passes seemed to consistently pay off.  It worked out for the Chargers on the first drive, but after that we wouldn't see the end zone again.  Almost everywhere I thought they should be running (like backed up in their end zone), they were passing.  Then after LT had made one TD run, from the six yard try they let LT run once before throwing two incompletes; one that was nearly picked off.  From first and goal at the six I think you give it to LT, three maybe even four times straight.