Share All sharing options for: Chargers vs. Steelers, January 15, 1995

The great games thread got me thinking about this game given our upcoming game against the Steelers.  The Chargers were coming off a dramatic come from behind victory against the Miami Dolphins.  Stan Humphries was the quarterback, Boss Ross was the coach and that human bowling ball Natrone Means lined up at running back for the Bolts.  The Chargers had put up an 11-5 record en route to winning their division with Means racking up almost 1400 yards, but the Chargers were still underdogs to a powerful Steelers team that went 12-4 and had one of the most powerful defenses in the league.  Pittsburgh had just finished demolishing the Cleveland Browns 29-9 in their previous playoff game, and were feeling pretty good already setting up for their superbowl rap video. 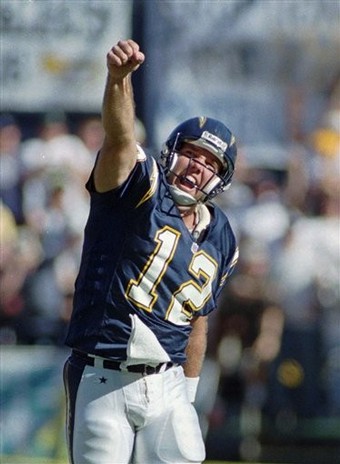 The first half went pretty much as pundits called it.  The Steelers defense held the Bolts to 3 points  and less than 50 yards on offense as the Steelers scored 10 and their quarterback, Neil O'Donnell moved the ball well.  The ground game was a different story, where Pittsburgh's running back Barry Foster couldn't get traction against the San Diego line.  Pittsburgh would tack on another field goal making the score 13-3, the Steelers appearing to be cruising towards victory.  It was midway through the third quarter when the unlikeliest of receivers would break free Tight End Alfred Pupunu; hardly known as a receiving Tight End broke one for 43 yards down the sideline; suddenly it was 13-10 and the Steelers were in a game.  I still remember Pupunu pretending to cut the top off the football and drink; something to do with a Tonga drink.

The Chargers would get the ball back with about five minutes left in the game.  The Steelers forced them into a third and forever situation.  True to their nature Pittsburgh sent the house and left Tony Martin one on one with Steeler cornerback Tim McKyer.  Tony Martin blew right past him and Stan Humphries was on the money as Chargers took the lead for the first time that day.  At 17-13 the Steelers would need to drive for the touchdown and the win.  They moved the ball against the San Diego defense and managed to drive all the way to the Charger three yard line.  There was time for just one more play.  O'Donnel passed it to a seemingly open Barry Foster, but Charger linebacker Dennis Gibson came in to bat it down.  The Chargers would go to midfield and celebrate in a way that LT would have frowned upon; but after enduring a week of Pittsburgh looking past them, they whooped it up and stomped more than a few terrible towels.